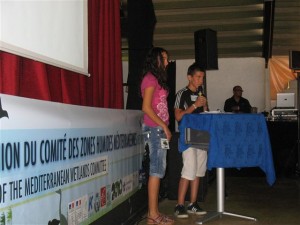 The 10th Meeting of the Mediterranean Wetlands Committee was successfully completed in Borgo, which is situated near Bastia, in Corsica, France. The MedWet/Com10 meeting took place from Sunday May 30th to Thursday June 4th 2010, at the invitation of the French government and the Ramsar Convention o­n Wetlands. The meeting was attended by 167 participants from various Mediterranean countries, the host country and region.

This meeting saw the involvement of local students for the first time. Eighteen students from the Collège d’Ile Rousse in Corsica as well as their teacher Ms Martine Philibert attended the MedWet/Com10. In her classroom, in the months before the meeting, Ms Philibert played with the students the first version of the RPG adapted by our Corsican partners to the etang of Biguglia in Corsica. During the plenary, the students presented the results of their game and what they had understood about wetlands and environmental problems through this activity. For the application of the game the contribution of Nicola Fremont, the Conseil d’Architecture, d’Urbanisme et d’Environnement de la Haute Corse and Mauricette Figarella and other members of staff from the Direction Régionale de l’Environnement, de l’Aménagement et du Logement (DREAL Corse) was invaluable, who provided expert help to the teacher and students.

If you wish, you can learn more and download the Role Playing Game developed after this activity.