Algeria now has 2,375 wetlands, including 50 Ramsar sites of international importance, composed of 2,056 natural wetlands and 319 of artificial wetlands according to the Directorate-General for Forestry (DGF). For better management and valorisation of these sites, the DGF has carried out numerous activities, including inventories and management plans, since the ratification of the Ramsar Convention by Algeria. 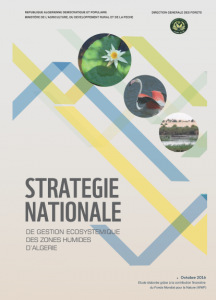 The DGF has developed the National Wetlands Strategy 2015-2030, with the support of the World Wide Fund for Nature (WWF), involving all stakeholders involved in the wetlands issue including associations through a Committee: National Multisectoral Commission for Wetlands, set up by Ministerial Order of 20 March 2012 (OJ No. 47).

This strategy is an instrument to accompany all sectors for the sustainable management of wetlands, contributing to the fight against desertification, adaptation to climate change, mitigation and protection of resources of the country.

It also aims at preserving the country’s wetlands and enhancing their resilience to climate change through ecosystem-based management, enabling them to continue providing ecological goods and services.