Tiber Island is located in the middle of the river of the same name, between the districts of Trastevere and the ancient Jewish Ghetto, and commands one of the most emblematic views of Rome (Italy).

Its charm is made even more mysterious by the legends that surround the origin and formation of this place. According to one version, the island would have arisen from the accumulation of sheaves of wheat that belonged to the Tarquini family, which the Romans threw into the river when the Tarquini were expelled from Rome. In reality, at the base of the alluvial sediments that make up the island there is not the precious cereal, but a volcanic rock, the tuff, that is characteristic of the whole territory.

Another legend, however, relates that during a serious epidemic, a ship with doctors and sages from the city sailed towards Epidaurus, a city sacred to Aesculapius (the Greek God of Healing), to bring back the cure to the plague. During the journey a snake, which was the reincarnation of Aesculapius, found its way on board. Once back in Rome, the reptile got off the ship and took refuge on the island, thus indicating the place on which to build a temple, which became a place of miraculous healings. From this legend, would also derive the characteristic shape of the island, which resembles that one of a ship.

The island, with its sandbanks and bridges connecting two parts of the city, has always been a strategic point for trade exchanges in the past. Today, it represents one of the most fascinating stops during a stroll along the boulevard of “Lungotevere”. 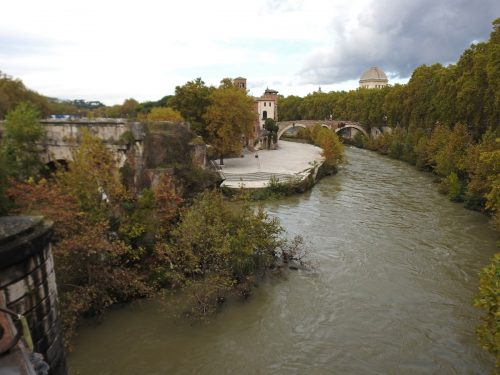 Life thrives in the Tiber Island

The Tiber Island, like many other urban wetlands, represents a “stronghold of biodiversity” between concrete pavements and buildings. Despite being in the center of one of the largest and most chaotic European cities, this river island has great natural value. Of the approximately 75 species of birds that nest in Rome, more than 15 nest along the urban part of the River Tiber.

The island, with its conformation and vegetation, consisting mainly of relict riparian or synanthropic species, creates some areas of low current, foraging sites for aquatic birds such as Grey Heron (Ardea cinerea), Little Egret (Egretta garzetta), and Common Kingfisher (Alcedo atthis). It is also a refuge for multiple wintering species that spend the coldest months along this stretch of river, as well as migrants that use the river as a wildlife corridor.

Along with the shores of the island, the nearby Ponte Rotto also acts as a roost site for many species such as Great Cormorant (Phalacrocorax carbo), Mallard (Anas platyrhynchos), Common Moorhen (Gallinula chloropus), seagulls, and a lot of Passerines. 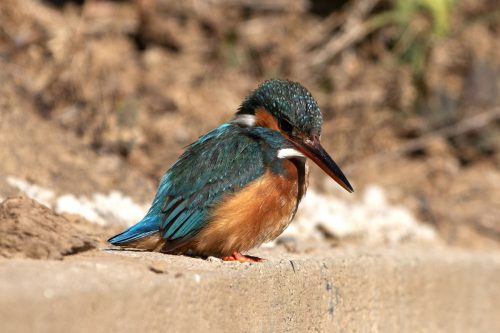 Together with the bird community, the fishes are also well represented – 22 species live in the waters of the wetlands of the Eternal City. Among them,there are the Common Carp (Cyprinus carpio), the South European Roach (Rutilus rubilio), and the European Eel (Anguilla anguilla), in addition to the Flathead Grey Mullet (Mugil cephalus) which travels up the river searching for food. Along the urban stretch of the Tiber there are also several species of reptiles and amphibians, such as the Italian Wall Lizard (Podarcis siculus), the Barred Grass Snake (Natrix helvetica), the Edible Frog (Pelophylax kl. esculentus), and the Common Toad (Bufo bufo).

Like all environments influenced by the anthropic presence, this wetland is also characterized by the presence of alien species. These are both directly related to the aquatic environment, such as the Wels Catfish (Silurus glanis) and the Coypu (Myocastor coypus),both associated with the neighboring trees, as are the Monk Parakeet (Myiopsitta monachus) and the Rose-ringed Parakeet (Psittacula krameri).

Ecosystem services provided by and activities organised on the Tiber Island

Among the ecosystem services that the island provides, there are those related to the well-being and recreation of citizens and tourists. In addition, the island is full of treasures including medieval towers, the Church of San Bartolomeo (which coincides with the legendary Temple of Aesculapius), and the adjacent “Ponte Rotto”.

Given its high natural value, the Tiber Island is therefore frequented by nature lovers and landscape photographers, and represents an excellent place to practice bird-watching activities for those who are new to this hobby, as well as a haven for the more experienced birders living in the local area. The information panel by the Municipality of Rome, right in the middle of the island, illustrates some of the most commonly seen animals in this area. 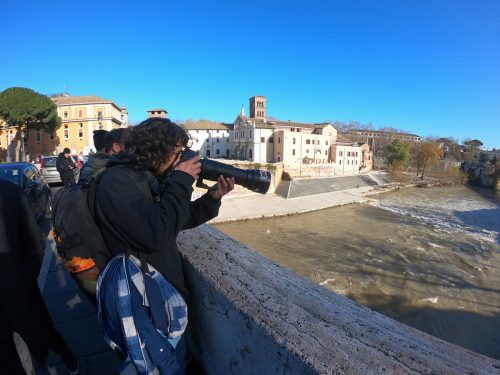 The ecotourism and environmental education company, K’ Nature, organizes several events and activities in the island, aiming to discover urban biodiversity, to raise awareness of its importantance, and to draw attention to the fact that, even a few steps from home, it is possible to observe many species and enjoy them!