The wetlands of Bas Loukkos are located in northwest Morocco, 160 kilometers north of Rabat and 80 kilometers south of Tangier. They are made up of a large marshy and estuarine complex that occupies the low plain of the Loukkos wadi. The estuary has a surface area of 3600 ha (PDAP, 1994). This complex is the result of the urban extension of the Larache town and hydro-agricultural developments. The latter, despite their size, have given way to a natural area with great ecological, educational and ecotourism potential.

The wetland complex of the lower Loukkos has been recognized as a site of biological and ecological interest, and was included in 1996 in the Master Plan for Protected Areas in Morocco. It was also proposed to be nominated as a Wetland of International Importance, a Ramsar Site, in the framework of a study to classify 20 new sites.

As an integral part of the landscape of the Larache town, the Lixus saltpans are an original habitat of the wetland complex of lower Loukkos.

A vital habitat for biodiversity

In addition to its landscape and cultural qualities, the site is home to migratory and breeding bird populations,including several rare or globally threatened species.

Within the complex, the Lixus saltpans represent a strategic relay for hundreds of thousands of coastal birds, which use them during their two annual passages. The gatherings of thousands of birds in the site, which adjoins the archaeological site of Lixus, give it undeniable landscape and heritage values. More than 50 species of birds breed in the Lower Loukkos wetland complex, including the Ferruginous Duck and the Purple Swamphen. Flamingos and rare species such as Audouin’s Gull and Eurasian Spoonbill are regular visitors to the Lixus saltpans. 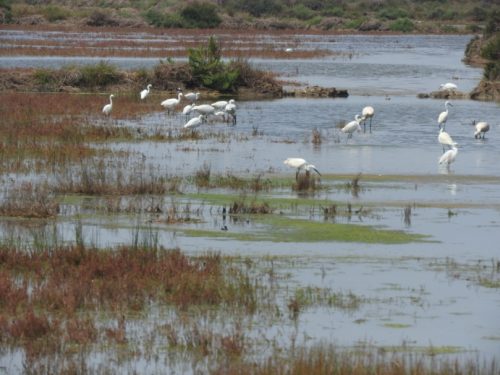 The saltpan rehabilitation: an environmental, cultural and economic asset

With the cessation of their exploitation in the 1990s, these saltpans, as well as the Loukkos estuary, lost all their commercial value. For this reason, GREPOM/BirdLife Morocco decided to rehabilitate them, through a double support: international (VBN/BirdLife Netherlands) and national (National Initiative for Human Development/Larache Province).

The saltpans are a very good example to illustrate and demonstrate that nature conservation and economic opportunities for local populations can work together. 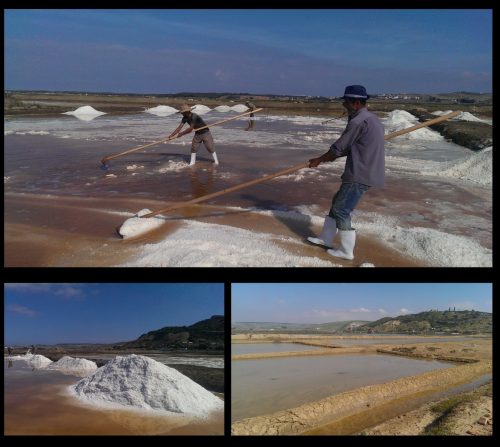 The rehabilitation project of Lixus saltpans is a good example of sustainable development, in the sense that the saltpans can play a major role both as a host ecosystem for migratory birds and as a source of income for the local community. The rehabilitation addresses sustainable development in several dimensions: environmental (nature protection), social (income for a local group), cultural (raising awareness of the value of the regional heritage), and economic (promoting the regional ecotourism potential).

Since the beginning of this project, GREPOM/BirdLife Morocco, with the support of its faithful partners, has undertaken to achieve the established objectives. In order to carry out the project efficiently, several studies have been carried out, namely: an evaluation of the environmental impact of the project and a study of the salt market in the province of Larache. Then, GREPOM was able to create and support the SELARACHE cooperative for the exploitation of the saltpans.

In order to identify the necessary rehabilitation work, GREPOM carried out several field missions, one with former salt workers, and another with competent engineers and members of the team of the National Initiative for Human Development (INDH). This made it possible to validate the development work to be carried out and the equipment to be acquired.

In the end, 39 hectares of saltpans were redeveloped. The cooperative is already exploiting the new saltpans and has begun to market the salt. Similarly, this rehabilitation has resulted in an abundance and specific richness of bird populations in the saltpans, where they have found an appropriate resting and feeding habitat.