The integration of 12 new Moroccan wetlands into the Ramsar Convention’s List of Wetlands of International Importance was officially announced on Thursday, 23 May 2019, on the sidelines of the commemoration of the International Day for Biological Diversity (IDB), by the Office of the High Commission for Water and Forests and the Fight against Desertification (HCEFLCD) of Morocco.

At this meeting, the High Commissioner for Water and Forests and the Fight against Desertification, M. Abdeladim Lhafi, awarded the classification certificates for the 12 new sites to the regional directors of the HCEFLCD, bringing the total number of Ramsar Sites in Morocco to 38. 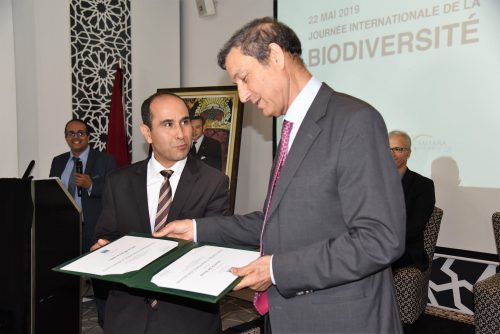 Awarding the classification certificates for the 12 new sites to the regional directors of the HCEFLCD. Photo credit : WWF Maroc

In this regard, Mr Lhafi said that the HCEFLCD aims to designate 30 new Ramsar Sites by 2024, implement 60 priority wetland development and management plans, and raise awareness among nearly 50,000 people per year within the framework of the nature animation program for wetlands. Mr Lhafi added that the programme also includes the development of new sustainable value chains for wetlands, including bird watching and artisanal fisheries.

Mr Lhafi pointed out that these designations are the result of a collaboration between the HCEFLCD, WWF North Africa, and scientists and experts from the Rabat Scientific Institute and GREPOM/Birdlife Morocco.

For his part, WWF North Africa’s Director, Faouzi Maâmouri, said that the simultaneous inscription of 12 sites on the Ramsar List is considered rare and complicated, reflecting the Kingdom’s commitment to wetland protection. Mr. Maâmouri praised the “strategic” partnership between WWF North Africa and HCEFLCD, covering many areas, including water resource management and wetland protection.

This event was marked by the presence of representatives of the ministries concerned, international organizations, NGOs active in the field of biodiversity and educational and research institutions.

This article was translated into English from an article published on the website of the Moroccan Press Agency (MAP)
Link: http://mapecology.ma/actualites/integration-officielle-de-12-nouvelles-zones-humides-marocaines-liste-de-ramsar/