We have learnt with great regret of the passing away of the author, artist, photographer, and conservationist Mr Fabio Perco, one of MedWet’s founding fathers. He was instrumental in the organization and running of the seminal Grado Conference that took place in Italy 28 years ago, in February 1991, the place and moment when MedWet started to take shape. 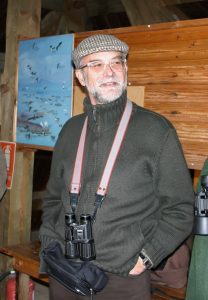 Mr Perco was an ardent defender of the conservation of the Grado-Marano lagoons and particularly the estuary of the transboundary Isonzo/Soča River. Some years later, in 1996, his efforts culminated in the formal recognition of the restored and the wild parts of the river mouth as a Regional Nature Reserve.

In May 2016, Mediterranean experts gathered again in the Cona Island Visitor Centre under the direction of Fabio Perco to focus on sustainable tourism in the coastal wetlands of the North Adriatic region and to prepare the designation of the Isonzo River Mouth for inclusion in the Ramsar List of Wetlands of International Importance.

The Ramsar Convention hopes to rapidly conclude this designation process with the Italian Ministry of the Environment, Land and Sea and to consider a cross-border Ramsar site including the North Adriatic coastal wetlands as a tribute to Mr Perco and his legacy.

Fabio Perco’s name remains linked to the Grado Conference that launched the vision of a Mediterranean Wetland Forum which was subsequently embodied in the MedWet Initiative, which was formally established a few months later with the support of the Italian authorities, the European Commission and others in the Circeo National Park and Ramsar Site near Rome. Mr Perco’s vision and his technical support were essential for this.

MedWet is very thankful to him for his invaluable contributions and remembers with gratitude his graceful illustration of the Grado Conference Proceedings and Strategy, as well as many other documents.

Rest in peace, dear Fabio. You will remain in our hearts.