The Delta del Ebro is the largest wetland in Catalonia, Spain, with an area of 320 km2, and one of the most important aquatic habitats in the western Mediterranean. Of the 320 km² of the Delta del Ebro, 20% are natural areas, 75% is arable land, and 5% is urbanized.

Part of the delta was declared a Natural Park in August 1983, and it was expanded in 1986, so that the Park itself now has an area of 7,736 hectares. It is an Important Bird Area (IBA); it was declared a Wetland of International Importance (Ramsar Site) and is part of the Ebro Biosphere Reserve. 50,000 people live in the delta, and the small town of Amposta one of the most important human settlements. The Interpretation Centre of the Natural Park lagoons is located in the Encanyissada reservoir, while the Park offices are located in the town of Deltebre. 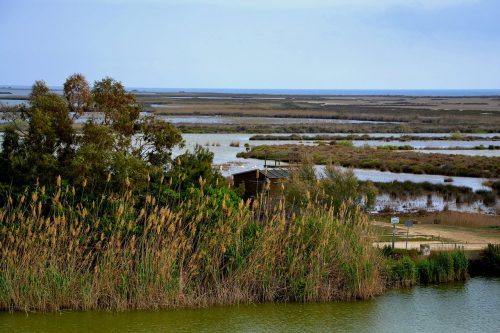 The Ebro River, the largest in Spain, is chiefly responsible for this environment, contributing the materials that come from the heads of the river to deposit them here, in its conjunction with the Mediterranean Sea. The sediments are therefore materials from the Pyrenees, the Iberian mountain system, and the Cantabrian mountain range. The amount of sediment materials has created a surface of more than 320 km², in which numerous habitats have been formed. The current shape of the Delta is a perfectly drawn “arrow” that penetrates about 22 km into the sea, creating the third largest delta in the Mediterranean behind the Nile delta with 24,000 km² and the Rhône delta, covering an area of 500 km².

The Ebro Delta wetland is internationally important for eight species of plants and hundreds of species of fauna, especially birds. Here 95 species nest, and many other species winter, rest and feed during migrations. In total, the Ebro delta shelters 316 species of common birds. 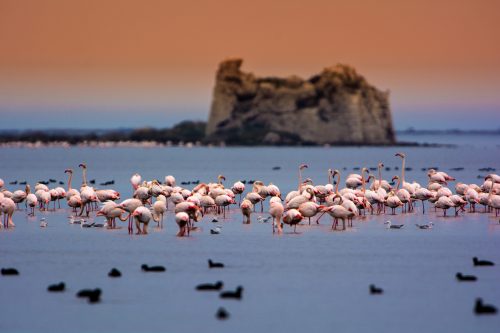 Another of the landscapes of the Delta del Ebro are “Els Ullals de Baltasar”, an area that is located between the towns of San Carlos de la Rápita and Amposta. There are there the most outstanding reservoirs of continental fresh water that comes from the mountains. They have an extension of approximately 10 hectares and you can count about 40 fresh water upwellings with a depth of 6 meters. The flora and fauna of the place is very rich, including turtles, frogs and birds characteristic of this region such as the capirotada or blackcap warblers and the bee-eaters. We also find forests of eucalyptus and water lilies that make good places for people interested in photography. 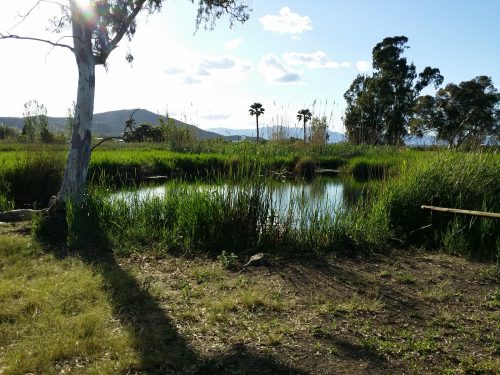 The economic activities taking place in the Ebro delta include agriculture (crops, fruit trees, rice), fishing, aquaculture and tourism with a total annual economic value of around 100 million Euros.

The rice fields cover 20,000 ha. They are a substantial part of the delta’s landscape and constitute in themselves a humid area of capital importance that involves, on the one hand, an enormous food production for the wild species and, on the other, the existence of a characteristic vegetation. There are many animal species that take advantage of the rice fields at some time in their cycle. The rice cycle requires periodic flooding of a large amount of the deltaic surface (40%) and its subsequent drying, while, in turn, successive contributions of fresh water flow through channels and ditches in the coastal lagoons and finally into the sea.

Although the agricultural exploitation is very important at present, the cultivation of rice and other crops were not undertaken in the delta until the end of the 19th century, with the opening of the channels that make it possible.

The rice cultivation system in the Ebro Delta is cyclical. From April to September (rice harvest time), fresh water flows from the river, through canals and ditches, to the fields, and then into the coastal lagoons and from these into the sea. By the month of December the entrance gates are closed and the water remains stagnant in fields and channels, where it evaporates during the winter until reaching the almost total drought at the end of February. During the month of March the fields are worked and prepared for sowing, when they are completely dry, until they are flooded again in April and the cycle begins again.

In addition to rice cultivation, the delta also maintains an important fishing activity. At the tip of the Banya, there is the Salinas de la Trinidad (San Carlos de la Rápita).

In the past, the productive activities were focused on the salinas (from the 10th century), livestock (since the 14th century) and hunting and fishing surely from very ancient times. The salt pans of the delta have been, along with fishing, the economic base of the territory until the arrival of rice but presently there are only a few salinas left.

From the agricultural advent in the area, there was a demographic increase of utmost importance in populating the Delta del Ebro with people from other regions of Spain. It is also relatively common for the delta to become the setting for the filming of music video clips (such as one of U2) or advertisements.

Birds are the common denominator of this beautiful landscape. A sunset with the stylised silhouette of a group of flamingos in a lagoon in the Delta de l’Ebre or a heron perched on the banks of the river are just some of the most valued encounters for bird watching enthusiasts. 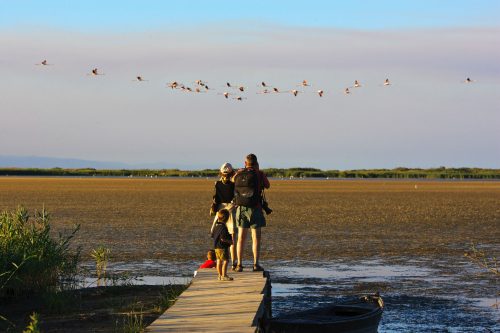 Birdwatching in the Delta del Ebro. Photo by: By Terres de l’Ebre Turisme

Visitors may be also interested in the MónNatura Delta del Ebro center designed to help visitors to understand and enjoy the magic of the Delta. To highlight the environmental importance of the wetland and its biodiversity, the center has created a set of visitor spaces and offers a series of recreational and didactic activities such as guided visits to the salt fields, traditional fishing and birdwatching, etc.

One of the delicacies that we can find when it comes to gastronomy is seafood, and especially the oysters from the Ebro Delta. Cultivated in the bay of Fangar, in the Delta del Ebro Natural Park, the waters of this area provide a unique quality. Delta oysters are thin, soft and very tasty; they are cultivated in an artisanal and meticulous way for many years. They can be consumed cooked or alive with a fewdrops of lemon and a glass of cava (local champagne) or wine.

Oysters, one of the delicacies that you can find in the Ebro Delta.

We also find the pier area, which provides a space for knowledge and practice of fishing activities. In this area there is a sample of different traditional fishing tools in the Ebro Delta, the so-called fishing gear, such as the esparavel, the gánguil, the bussó, the banarreta and the trammel. 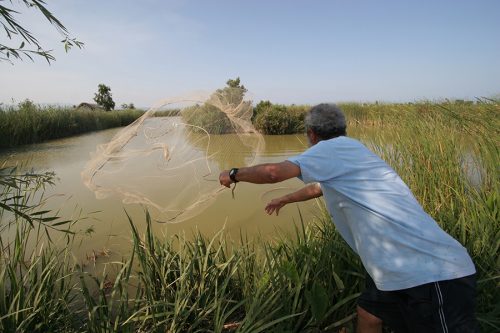 The canoe is the perfect means of transport to achieve a total connection between person and environment. With this activity both children and adults can go into all corners of the multiple wet areas that we can find in the delta, at a leisurely pace and without losing any detail of this rich ecosystem, and all this, without causing any negative impact in nature, a vital aspect for the sustainability of the Natural Park.

For birdwatchers, on 20-22 September 2019, for the fifth consecutive year, the Ebro Delta will host the International Ornithology Festival, with a wide and attractive program of activities including lectures, courses, workshops, contests and other activities, coupled with a large fair of products and services for the birder and people who enjoy nature as a whole.

For more details, visit the website of the International Ornithology Festival.

The Ebro Delta is one of the most important wetlands in the Mediterranean. It needs effective protection if we want to keep its beautiful landscapes and precious services that the Delta provides for local populations.