People in Sardinia (Italy) are in love with their country, hosting many wetlands of high ecological value. These wetlands are rich in biodiversity and provide significant economic, social and cultural benefits to the local population.

In its first year, the Maristanis project for ‘Integrated Management of Coastal and Marine Habitats of the Oristano Gulf (Sardinia, Italy)’ came out therefore with an extraordinary result: getting private and public actors involved in the project.

The Maristanis project is co-financed by the MAVA Foundation and coordinated by the MEDSEA Foundation, in collaboration with the Marine Protected Area “Sinis Peninsula – Mal di Ventre Island” and the FLAG “PESCANDO”. The project is aimed at defining an integrated management system that can serve as a model for other coastal regions of the Mediterranean.

The first goal was to establish an effective governance of the territory, which boasts six Ramsar Sites in 7,700 hectares of wetlands in the Gulf of Oristano. To this aim, the Local Consultation Group (LCG) was established, composed of 13 municipalities, the Province of Oristano, and the Sardinia Regional Administration. Three LCG’s meetings were held in the presence of the representatives of Maristanis’ partners: the Marine Protected Area (MPA) of Sinis and the Flag-Sardegna Pescando. Policy-makers involved in Maristanis, within and across all sectors, began to recognize and take into account the multiple values of the six Ramsar Sites and their interdependencies if the wise use of wetlands is to be achieved.

In order to debate on identified issues and proposed solutions, Maristanis’ team managed to involve different local and relevant regional stakeholders into the project such as mayors, experts at the Province of Oristano,  the Local Reclamation Body, the Water Agency, Environmental Department, and Agriculture Technical Assistance Department of the Regional Government, the Regional Environmental Protection Agency, an expert from the Department of Engineering of the University of Cagliari, amongst others. In addition, some of the most important private actors in the territory have joined the project, among others Niedditas (one of Italy’s biggest aquaculture companies), 3A (the cooperative of farmers), RisOristano (a rice producer), and tourism operators, etc.

Once Maristanis’ network has been created, the step forward was to make it work efficiently through the Local Consultation Group, chaired by MEDSEA, and by reinforcing the local administration with a technical assistance team. During the 3rd meeting of the LCG, participants expressed their consent to sign a Wetlands Contract following a proposal of MEDSEA, as a first step to formalising their commitment to play an active role on the new model of governance of the territories they represent.

MEDSEA hosted in Cabras (Sardinia) on 7-9 June the MAVA Steering Committee on action plan M3-coastal wetlands to discuss not only efforts at the local level but also how to strengthen networking with international partners. It was the opportunity for Lynda Mansson, Director General of the MAVA Foundation, Paule Gros, Director of the Mediterranean Basin Program and Luis Costa, Manager of the Mediterranean Basin Program met international partners involved in the projects to safeguard wetlands. For MEDSEA, it was a good way to share activities during the first year of the Maristanis project and to visit the project sites. 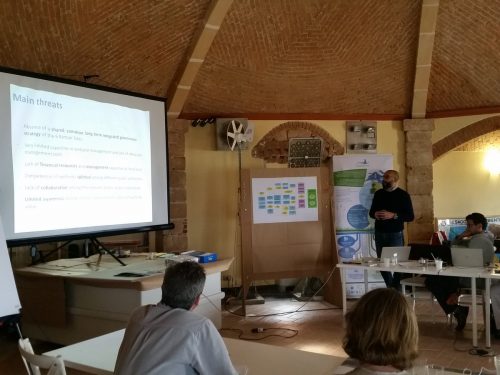 Previously, in Cagliari, from 6 to 9th March, MEDSEA also hosted the socio-economic workshop entitled “Saltpan initiative: Addressing wetland conservation in the Med region” convened by BirdLife International in Sardinia. The workshop was interactive and participants were encouraged to share their own knowledge and experiences as well as to get involved in practical exercises using ecosystem services approaches. A field trip was also organized in Oristano wetland, one of the pilot site. Read more on the Workshop here. 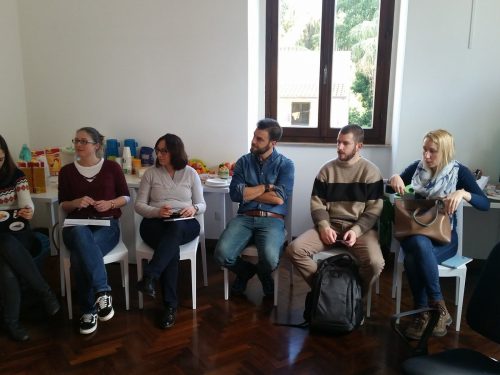 Despite the existence of copious legislation, local administrations continue to face difficulties in its implementation due to several reasons: lack of public administrators’ technical expertise; stakeholders’ mistrust in relation to the economic limits that protective regulatory tools could imply; and difficulties in accessing public funding. Maristanis is working to provide assistance to local administrations completely, in order to access public funding for the preparation and implementation of management plans. Most of the potential funding opportunities are related to public funds made available by the Sardinia region. All the six Ramsar Sites involved in Maristanis are eligible for funding. Priorities will be the effective maintenance of canals and the improvement of the hydrogeological conditions of the ponds, balancing freshwater areas and brackish waters, as well as the reclamation of riparian areas in Ramsar Sites.

Projects that have already been started:

Working on the network wouldn’t be useful enough without starting up different actions to protect and enhance the wetlands. First of all, a vulnerability map was produced to visualise the impacts and the most affected areas and to plan the mitigation measures. Maristanis has identified sites in need of some kind of anti-trawling systems. As an extra result, the Marine Protected Area of Sinis has assigned a professional engineer for the design of the anti-trawling structures that will be installed quickly. A preliminary project of the installation of 64 structures in the MPA has been realized and the project has been submitted on the 26th of July to the Sardinia Region with a request of financing. The analysis concerning the state of health showed a critical situation in small harbours in Marceddì and Cabras, due to fuel leaks by fishermen’s boats and (sometimes uncontrolled) yachts. To cope with this source pollution, an easy and low-cost solution was adopted. This solution was elaborated in the framework of circular economy by a local firm: EDILANA. EDILANA created a product with Sardinian sheep wool (currently a waste) to absorb and degrade fuel leaks. The baseline analysis of the conservation status of the six Ramsar Sites has been carried out and some relevant endangered species have been identified. Following an in-depth work with local experts and researchers, priority has been given to the design and implementation of urgent conservation measures for the Osprey (Pandion haliaetus) and for the Kentish plover (Charadrius alexandrinus). Projects (Mistras) have been carried out to promote the Osprey re-colonization of Sardinia with the construction of artificial nests. 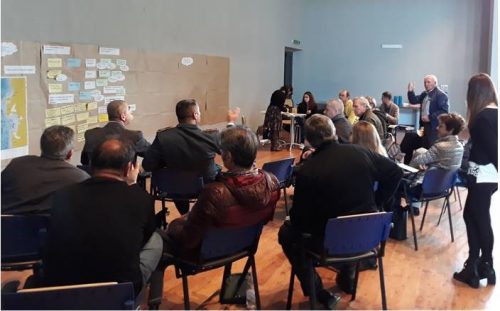 The technical support to these projects.

A two-day meeting  was organized in April at the Tour du Valat (France) with the staff of the Mediterranean Wetlands Observatory (MWO). It was the decisive step towards for the development of Oristano’s Wetlands Observatory. The logical framework and the list of indicators of the local Observatory are defined on the MWO model and according to the local context. According to the planned activities, the data are collected and stored in specific databases and shared with the Technical Assistance Team (TAT), while the geographic data are analysed and elaborated with the ArcGIS software and then shared with the TAT through a GIS platform. The strategy also includes some activities for sharing all project materials to the web community through the project website (www.maristanis.org) and through a WebGIS that will be activated starting from the second year of the project.  All data collected in the different project strategies were used to update the six Ramsar Information Sheets.

The map of landscape and cultural heritage has been developed combining the data collected from the database of the Regional Landscape Plan (PPR) and the data collected on site, both through the analysis of the context and of the value of cultural heritages as perceived by the local populations.  Among all the data collected, the working group chose to focus its attention on the heritages that better represent the communities and in which local people recognize their identity. The workshop CulturaLab was realized on 5th of June 2018 involving the most reactive and active municipalities and associations of the Ramsar territories. The workshop showed the willingness of the stakeholders to work by connecting the cultural assets present in the individual municipalities to natural assets present in the all Ramsar areas, considering them as part of a unique territory, so as to be able to develop valorisation projects. Just to cite one of the projects: designing the multimedia setting up in the Old Tower in Marceddì.

Without awareness and knowledge of the values of wetlands, coastal and marine habitats, nothing is possible. Through Maristanis, a series of events were promoted involving more than a thousand participants from local and international stakeholders. 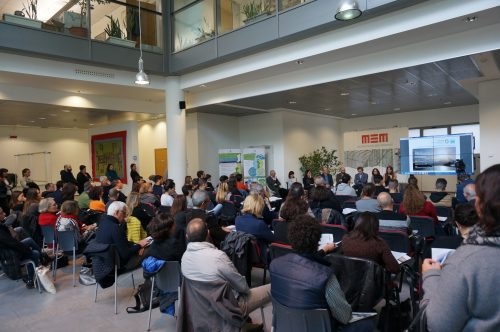 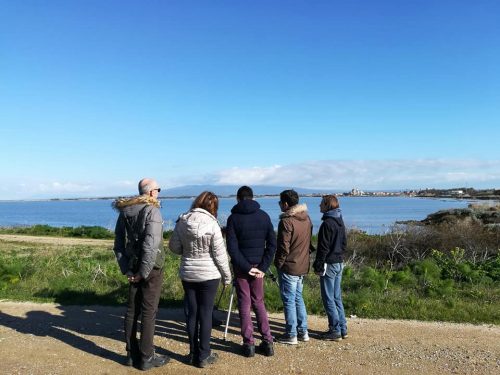 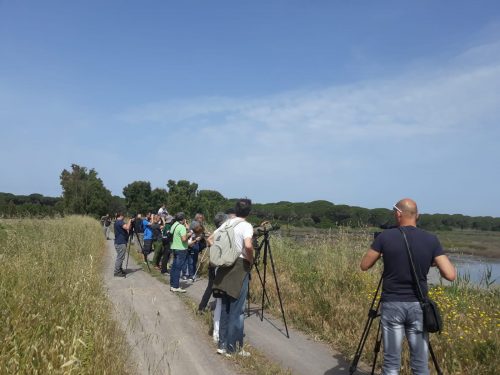 A Birdwaching activity aiming to explore the world of birds that live in wetlands of Oristanio. Photo credit: MedSea 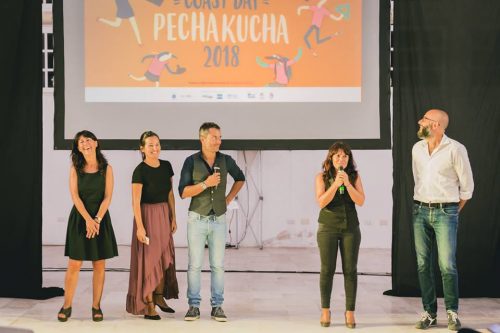 All of the expected results for the first year of activity have been achieved, and no particular changes to the general structure of the project were found to be necessary. In this period, the coordination efforts focused on the inception phase of all the strategies with particular attention to the research and analysis of data, the activation of the participation process, and the launch of the communication and awareness campaign.

Watch the video introducing the six Ramsar Sites of the Gulf of Oristano and the Peninsula of Sinis (Sardinia, Italy) involved in the MARISTANIS project.