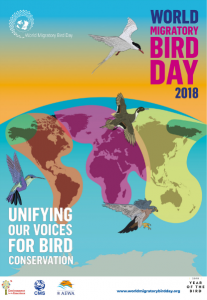 This year, the world celebrates World Migratory Bird Day (WMBD) under the theme “Unifying our Voices for Bird Conservation“. As a new global platform that unifies efforts worldwide, WMBD will be reinforcing education and awareness-raising of a broader audience about the need to protect migratory birds and their habitats – at all different levels, in all parts of the world.

The celebration of this day gives the opportunity to share experiences and best practices of bird conservation across borders, within and between the world’s flyways, namely the African-Eurasian, the East Asian-Australasian, and the Americas flyway. It is intended also to raise awareness of the current state of conservation, highlighting the general and specific threats that birds are facing as well as the potential ways to ensure safe corridors during their migrations.

Let’s commit ourselves today and throughout the year to help protecting birds whenever they are present in our localities or during their flyways. 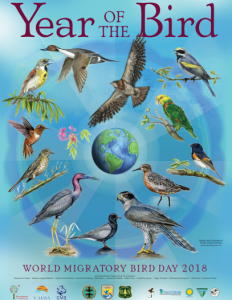 The National Geographic Society, the Audubon Society, the Cornell Lab of Ornithology, and many others are launching an exciting new campaign, “2018: International Year of the Bird’’, to raise awareness of climate change impacts upon avian migrations, and to encourage bird watching and citizen science initiatives.

“This effort aims to heighten public awareness of birds because of their wonder and beauty—and because they symbolize nature’s interconnectedness and the importance of caring for our shared planet,” explains the Audubon Society.

Read more about the International Year of the Bird here.

A Summit for the Flyways

From 23-26 April 2018, government, donor, private sector, research, NGO and international convention representatives, from more than 70 countries and 100 organisations, gathered in Abu Dhabi for the first Global Flyways Summit. This unprecedented meeting brought together actors and decision-makers from all eight flyways of the world to address the critical declines in many migratory bird populations. 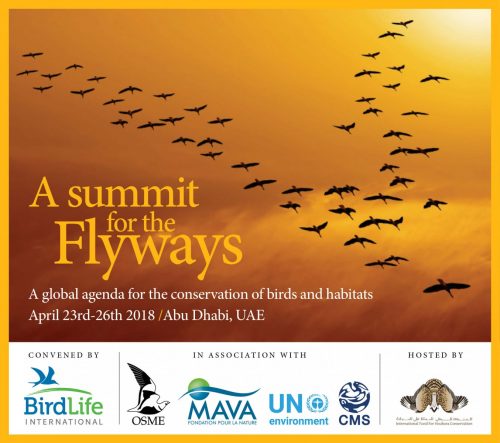 The outcomes of the Summit were informed by the release of the State of the World’s Birds 2018; of the world’s 11,000 bird species, one in five are migratory, of which nearly 40% are in decline, with one in eight being threatened with global extinction.

Read more about the State of the World’s Birds 2018

The Summit also issued an official declaration, outlining how the plan to tackle each of the key threats to migratory birds. Read the full BirdLife article here.

A multi-stakeholder Global ‘Caring for Coasts’ Forum, mandated by the relevant Multilateral Environmental Agreements (MEAs), especially the UN Convention on Migratory Species (CMS), Agreement on the Conservation of African-Eurasian Migratory Waterbirds (AEWA), Ramsar Convention on Wetlands and Convention on Biological Diversity (CBD), should be established to bring together relevant stakeholders, to advance sustainable approaches to coastal ecosystem protection, management and restoration for migratory species and ecosystem services including climate change resilience.  It should support existing partnerships and mechanisms for flyway-scale conservation, such as flyway site networks, and be underpinned by regional situation analyses of coastal habitat status and trends (e.g. for our Mediterranean coastal wetlands campaign).

Focus on the Mediterranean

The Mediterranean is rich in wetlands which are crucial habitats for birds during their migrations. Unfortunately, hundreds of poachers wait, each year, for the aerial travelers to arrive in their traditional resting grounds.

Despite legal protection, illegal bird killing is a growing concern across the Mediterranean as it is taking place at extraordinary and unsustainable levels.  According to a study done by BirdLife International, unlawfully shot, trapped or glued, around 11–36 million birds are killed/taken illegally in the Mediterranean every year for food (65–71%), sport (82–85%), and for use as cage-birds or decoys (29–39%).

“Importantly, eight million birds are estimated to be killed or taken at just 20 locations. Given the uncertainty around these numbers because of the difficulty in documenting illegal activities, the total could be anywhere from five to 11 million,” said Dr. Anne-Laure Brochet, lead author of the Killing report (August 2015).

Caught in nets – one of the cruel ways birds are being killed illegally in the Mediterranean. Photo Credit: © BirdLife Cyprus 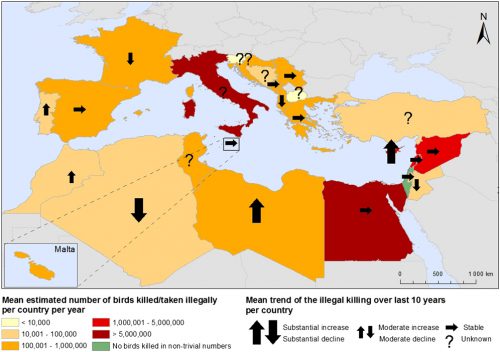 Spatial pattern of illegal killing/taking of birds in the Mediterranean

Read more in BirdLife’s report ”The Killing” (August 2015) about the illegal killing of birds in the Mediterranean.

An intergovernmental Task Force in the Mediterranean

The Intergovernmental Task Force on Illegal Killing, Taking and Trade of Migratory Birds in the Mediterranean (MIKT) has been convened by the CMS Secretariat in conjunction with the Secretariat of AEWA, the Raptors MOU Coordinating Unit and the African-Eurasian Migratory Landbirds Action Plan (AEMLAP) Working Group. It brings together governmental representatives of CMS Parties around the Mediterranean, including the European Union and other interested parties. Representatives from non-CMS Parties as well as relevant international organizations and networks are also part of MIKT as observers.

How can we protect bird populations?

Illegal killing of birds is a significant threat to migratory birds in the Mediterranean. Successful protection of these species from extinction in the region requires that we:

BirdLife partners along the East Atlantic Flyway have joined forces to save the precious saltpans of Southern Europe and Northern Africa, and the striking birds that rely on them to fuel their incredible journeys between the two continents.

Download the complete State of the World’s Birds 2018 report

Read our previous article about the 3rd Adriatic Flyway Conference held from 19 to 23 March 2018 in Serbia.

Watch the short film “Adriatic flyway” about bird migration across the Eastern Adriatic.