Migration is an instinctive phenomenon present in many fish species which migrate between the sea and the rivers to reproduce, feed, and complete their life cycles.

Unfortunately, during their migration, many migratory fish species are severely threatened. Every migration involves a wide range of threats, often caused by manmade obstacles, including dams, weirs, and sluices, which disrupt the natural flow of rivers and prevent successful migration. If they cannot reach their breeding ground, the species will decline and eventually become extinct. 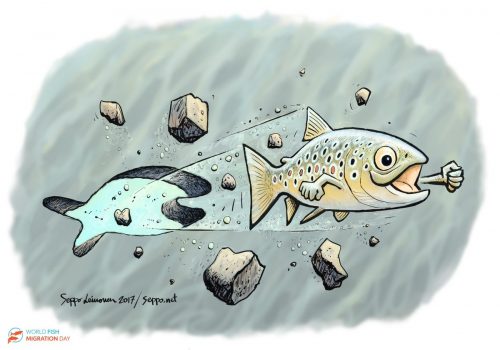 If fish could break through dams… Cartoon: Seppo.net

On 21 April, we celebrate World Fish Migration Day (WFMD), which aims to recover healthy rivers and prevent future degradation and species extinction. Migratory fish make up a crucial link in the food chain and play an important role in healthy and productive river systems. Furthermore they provide an important food supply and livelihood for millions of people around the world.

On WFMD, many activities such as workshops on fish passage management and river visit programs are organized, united by a common theme – ‘’ Connecting Fish, Rivers and People’’. WFMD aims to improve environmental conditions, which we owe to future generations, and to ensure the sustenance of the millions of human lives that depend on rivers. In order to accomplish this brighter future, we need to start by educating people and raising awareness of the current situation as well as of the potential solutions to the problems.

Wetlands are very important in life cycle of fish across the world. Healthy wetlands are vital to the survival of most fish species because they fulfill their essential needs:

The unwise use of wetlands, their loss and their degradation have negative impacts on fish populations. As the wetland habitats are drained or altered, it becomes more difficult for fish to find the habitats they need to survive. Wetland degradation is a serious problem for fish in many forms, and in particular: 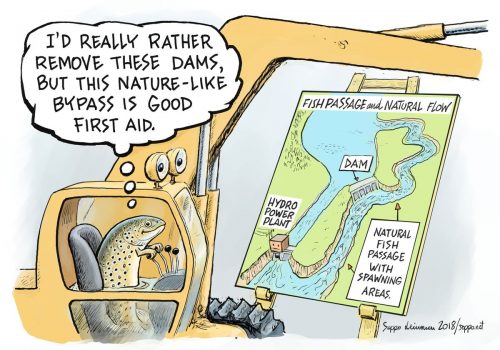 A focus in the Mediterranean

Human activities cause wetland degradation and loss by pollution, habitat destruction, and the introduction and subsequent population explosions of non-native species. All this has brought us to a point where the Mediterranean region, according to the International Union for Conservation of Nature (IUCN), risks losing 56% of endemic freshwater fish, 36% of freshwater crabs and crayfish, 29% of amphibians, and 19% of dragonflies during the next decades. Trends in wetland biodiversity are particularly bad in the Eastern Mediterranean (IUCN report: the Mediterranean: a biodiversity hotspot under threat). 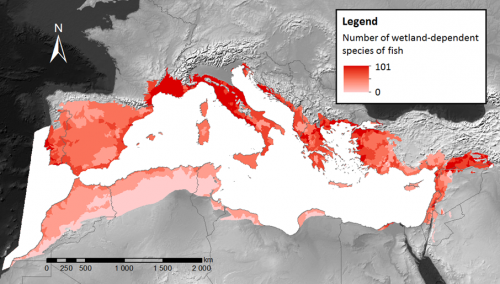 According to the IUCN Red List, the conservation status of this group of species is of particular concern: 38% of the totals are threatened (CR+ EN+VU). Human activities have already resulted in the permanent extinction of 12 species of fish in the region. Among the identified threats are the alteration of the hydrological functioning of watercourses following the construction of dams and irregular rainfall in a context of climate change, drainage of wetlands, water pollution, and introduction of exotic fish species. 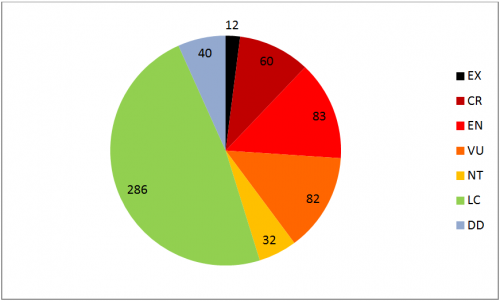 Migratory species such as shad, lampreys and eels transiting between rivers and the sea to complete their life cycle are particularly threatened by the alteration of the ecological continuity of rivers. Locks and dams, particularly numerous on Mediterranean rivers and streams, affect the flow downstream of these structures, modify riparian habitats (important for aquatic fauna), and prevent migratory fish such as shad from reaching their spawning sites.

Some key species in the Mediterranean

Lampreys live mostly in coastal and fresh waters in temperate areas and are migratory and anadromous. Anadromous means that the fish migrates from the sea up into fresh water to spawn, such as salmon, striped bass, and the sea lamprey. The Sea Lamprey is threatened by the fragmentation of rivers, dredging and sediment pollution, and especially in the Mediterranean basin they are considered rare and vulnerable.

It is found in the eastern Atlantic Ocean and the Mediterranean Sea and is an anadromous fish which lives in the sea but migrates into fresh water to spawn. Multiple anthropogenic-driven alterations of the watershed (mainly dams), impoundment of large rivers throughout Europe, and water pollution have caused a severe decline of the species. Most populations declined during the first decades of 20th century. 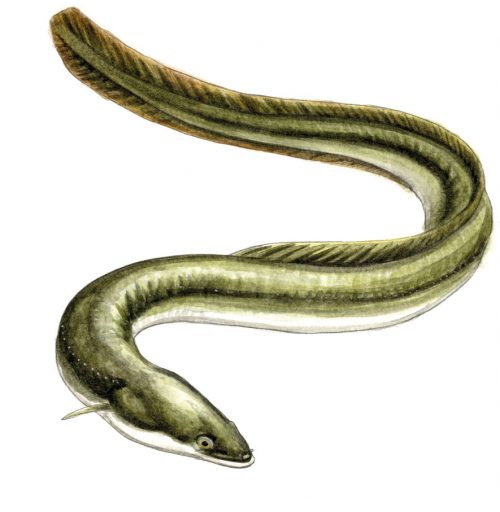 The European eel (Anguilla anguilla) is a species of eel, a snake-like, catadromous fish. Catadromous means that the fish migrates from fresh water down into the sea, such as eels.

The European eel is a critically endangered species (Red List category). Since the 1970s, the numbers of eels reaching Europe are thought to have declined by around 90% (possibly even 98%). Contributing factors include overfishing both juveniles (glass eels) and adults, organic pollution and heavy metals, a nematode parasite (Anguillocola crassus), and barriers to migration such as hydroelectric dams.

Some key projects in the Mediterranean

LIFE MIGRATOEBRE project ‘’Migratory fish recovery and improved management in the final stretch of the Ebre River’’ is a best practices and demonstration project for final stretches of major European rivers.

The project is based on the implementation of mitigation measures in relation to rivers, hydromorphology improvement, especially on rivers’ ecological connectivity, and fish passage issues associated by the Water Framework Directive and the European Eel Recovery Plan (Regulation 1100/2007).

At the same time, investments will be made in Natura 2000 sites and on species and habitats targeted by Habitats Directive conservation, at local and regional levels.

Read the flyer of the project.

Watch the video presenting the project

The migration route and the spawning site of the European eel Anguilla anguilla are still uncertain. It has been suggested that the Mediterranean eel stock does not contribute to spawning because there is no evidence of eels leaving the Mediterranean Sea. To test this hypothesis, researchers equipped eight female silver eels from the south of France with pop-up satellite tags during their escape from coastal waters. 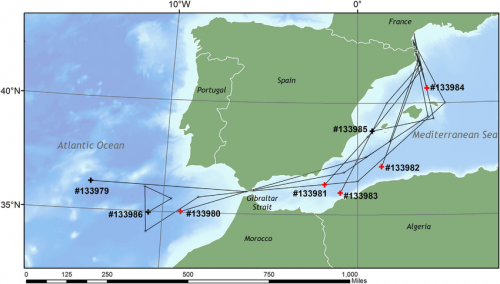 Map of the western Mediterranean Sea and Eastern Atlantic Ocean, showing the approximate tracks of the individual tagged eels, based on a restricted number longitude and latitude estimates.

These results are the first to show that eels from the Mediterranean can cross the Strait of Gibraltar and continue their migration into the Atlantic Ocean. This finding suggests that Mediterranean countries, as for other EU states, have an important role to play in contributing to conservation efforts for the recovery of the European eel stock.

Read the whole scientific article on the eel’s migration in the Mediterranean here.
For further information, please contact Elsa Amilhat, CEFREM, at elsa.amilhat@univ-perp.fr .

FOCUS ON THE RHÔNE

In order to preserve populations of amphihaline migratory fish, i.e., those whose life cycle alternates between the marine environment and a fresh water environment, knowledge of the state of the species and their living environment is fundamental.

It is also a tool for disseminating information to the general public and professionals working in the field of biodiversity. 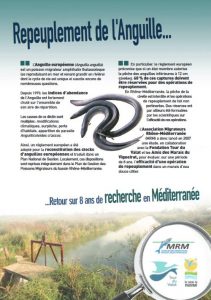 For a look back at eight years of research in the Mediterranean on the eel repopulation in the Camargue with the Marais du Vigueirat, MRM and Tour du Valat.

See the brochure of eel repopulation here (in French).