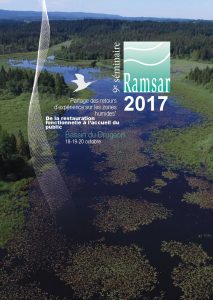 The 9th Seminar of Ramsar Site Managers was held from 18 to 20 October 2017, at the Espaces des Vallières in Labergement Sainte-Marie (Doubs), within the Drugeon Basin Ramsar Site.

It was co-organized by the Syndicat Mixte des Milieu Aquatiques of Haut-Doubs, the pôle-relais Tourbières and the Ramsar France Association under the theme of “Sharing experience  on wetlands: from functional restoration to visitors management“. This seminar brought together nearly 150 participants during the three days.

The first day provided an opportunity for elected officials and representatives of the various bodies (State, European Union, Ramsar Convention Secretariat) to recall their continuing interest in preserving wetlands, and in particular peatlands.

Gérard ROGNON, Vice-President of the Syndicat Mixte des Milieu Aquatiques of Haut-Doubs, Jérôme BIGNON, Senator of the Somme and President of the Ramsar France Association, Laure SOULIAC, from the Ministry for the Ecological and Inclusive Transition, Sophie OUZET, Responsible for Nature and Environment Policy at the Directorate-General for Environment in the European Commission for the Environment, and Martha ROJAS-URREGO, Secretary General of the Ramsar Convention, all expressed this need and the importance of meeting in order to exchange information on this theme. 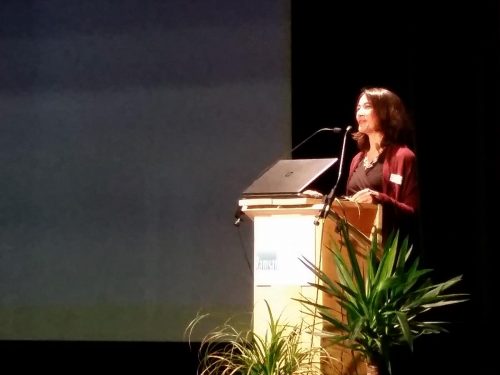 Martha ROJAS-URREGO, Secretary General of the Ramsar Convention, recalled the continuing interest of the Convention in preserving wetlands, and in particular peatlands. Photo: ©MedWet

A focus on the Drugeon Basin Ramsar site was the focus of a presentation on the ecological peculiarities of the territory, the feedback on the Drugeon re-meandering conducted over the last 20 years, and the formalization of the project to extend this Ramsar Site to peatlands of the Jura Mountains.

The day continued with the General Assembly of the Ramsar France Association, with the validation of the Executive Report, the activity report, and the financial report. There followed the election to replace the outgoing third of its directors and a discussion of the future actions of the association.

Finally, the day finished by a tasting of Comté and a buffet of regional specialties brought by the participants.

The second day began with a morning devoted to peatlands and news of French national wetlands. 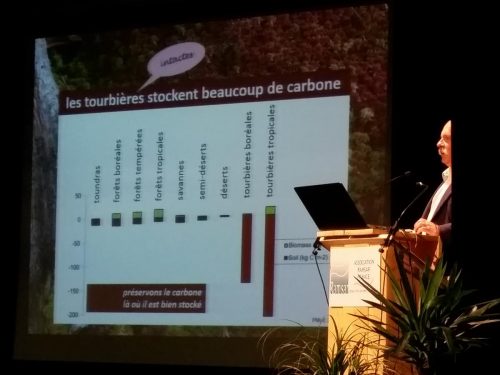 Then Ghislaine FERRERE (MTES) provided an update on news about French Ramsar Sites and wetlands (designated and future sites, the Ramsar Triennial Report, next Conference of the Parties, etc.), followed by a presentation by Justine DURET (Ramsar France) showing an overview of the situation of the three Ramsar Sites in the Rhine-Meuse basin and the feasibility study of a fish industry on one of these wetlands. 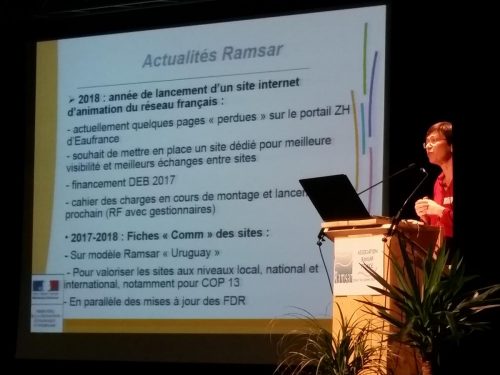 The afternoon was dedicated to four parallel workshops. The participants were able to discuss these topics:

The rich exchanges were then reported back to the plenary and will be available shortly in the proceedings of the seminar.

Finally, the third day was devoted to field visits to the Drugeon Basin Ramsar Site: the participants were able to discover the regional nature reserve of the mires of Frasne, the Sensitive Natural Area of Bonnevaux-Bouverans, the ornithological observatory of the river Drugeon, and Drugeon’s re-meandering work as part of the LIFE programs. 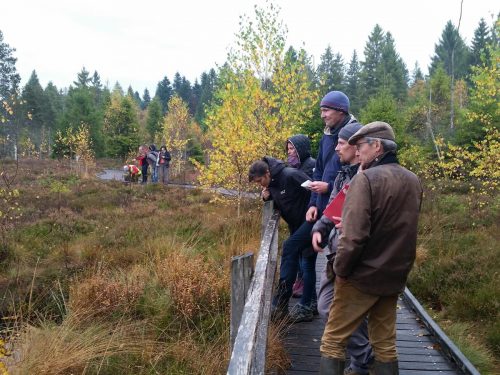 Field visit to the regional nature reserve of the peatlands of Frasne. Photo: ©MedWet 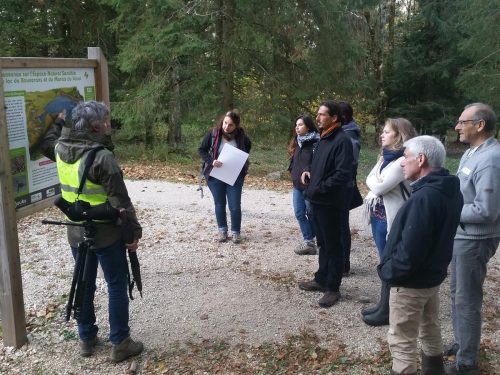