Nowadays, disasters and disaster risk are increasing all over the world and are a growing threat to countries, to their economies and to their populations. A recent study, led by World Bank staff, shows that natural disasters push more than 25 million people into poverty every year, and create economic losses of close to $100 billion annually. 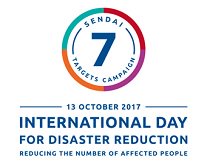 The International Day for Disaster Reduction (IDDR) was started in 1989, after a call by the United Nations General Assembly for a day to promote a global culture of risk-awareness and disaster reduction. Held every 13 October, the day celebrates how people and communities around the world are reducing their exposure to disasters and raising awareness about the importance of reining in the risks that they face.

The 2017 campaign seeks to raise global awareness about effective actions, policies and practices that have been taken to reduce exposure to disaster risk at the community level, thereby contributing to saving homes and livelihoods.

The 2017 edition continues under the “Sendai Seven” campaign launched by the United Nations Office for Disaster Risk Reduction (UNISDR), and it is centered on the seven targets of the Sendai Framework, the first of which is reducing disaster mortality.

Wetlands in all parts of the world play an important role in disaster risk reduction if they are effectively managed and restored. They act as natural safeguards against disasters, which makes them important for protecting communities most at risk and vulnerable to the devastating effects of extreme weather events, and helping countries to save millions of dollars in damage and insurance payments.

Well-managed wetlands make communities resilient in the event of extreme weather events and help to minimize the damage from these hazards. They provide many significant services all for free; coastal wetlands such as mangroves protect against flooding, for example, and serve as buffers against saltwater intrusion and erosion. Inland wetlands such as floodplains, lakes and peatlands absorb and store excess rainfall, which reduces flooding as well as delaying the onset of droughts by storing water (Statement of Ms. Martha Rojas-Urrego, Secretary General of the Ramsar Convention).

Integrating wetlands as natural infrastructure for disaster risk reduction (DRR), alone or in conjunction with traditional “hard” infrastructure, can mitigate hazards and increase the resilience of local communities and those living across entire river basins or coastal zones.

Have a look to the Policy Brief ‘’Wetlands for disaster risk reduction: Effective choices for resilient communities” published by the Ramsar Secretariat.

Learn more about the ecosystem services provided by wetlands.

During the IDDR, UNISDR, the European Commission, UNESCO and Wetlands International will hold a special event in Brussels, Belgium, on 13 October. The event is intended to show evidence of the efficacy and cost-effectiveness of community-level, ecosystem-based disaster risk reduction (eco-DRR) and climate change adaptation solutions. Investments in ecosystem-based DRR strategies have a great potential for cost-effective avoidance of damages and casualties from disasters, while offering multiple benefits to society.

Read more about this event here.

The MedWet cartoon produced in 2015 is a useful tool to show the services provided by wetlands, especially in the Mediterranean.