The Wilaya of Bejaia, in Algeria, is known for its diverse wealth and its Salinas located in the three villages of the Kabylia in the Commune of Feraoun, which represent a remarkable natural, cultural and historical heritage.

The first Salina is called Ichekabene and belongs to the village of Ichekaben. It takes its name from the ancestor Mohand Waali Achekav (originally from Ighil Ali in the region of Ath Abbas), while the second Salina belongs to the two villages of Iadnanen and At Ounir. The three mentioned villages form the region of Imellahen, which means “Workers of the Salinas”, and Tamellaht, which means “Salina”. The distance between the two Salinas is nearly one kilometer. 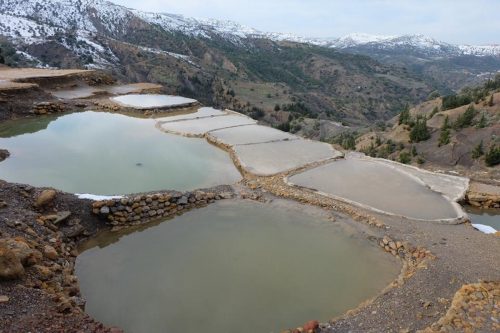 Unlike the salt marshes whose source of salt water is the sea or the ocean, that of the Salinas of Imellahen is in the underground: the very salty water comes from the side of the mountain named Mghendas via springs that are sheltered and which are then transported in the form of channels. This collection uses a very old method: salt water receptacles are dug in the rock and the salt spring water is channeled to reservoirs which are located downstream.

A hard and very traditional work: barefoot in salt water, salt workers collect the salt from the ponds under intense daytime solar heat before raising their crops on mules and taking the paths of the plateau to their own homes located nearby. 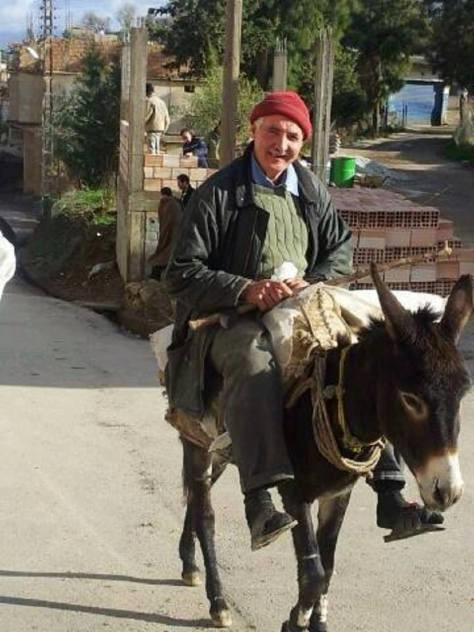 The economy of the local population centers on mountain farming, especially olive cultivation, which is principal in this region, and the collective exploitation of the Salinas.

Not so long ago, the families of the three villages lived on the barter of this salt with other products for their daily needs. 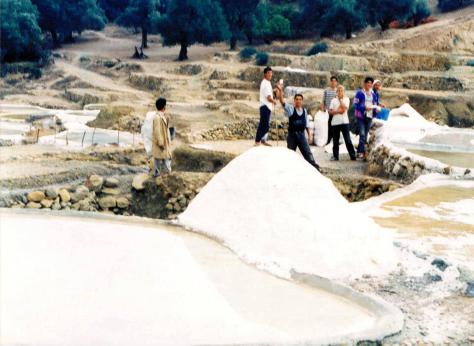 The Salinas of Imellahen offer a sumptuous panorama. Unfortunately, they suffer from abandonment and degradation, but there are some elders of the three villages who perpetuate these traditional practices and try to restore them. These Salinas are an important heritage and their rehabilitation could enable the villages to create and develop a most captivating tourist site.

The population of the three villages is enthusiastic about the revival of two ancestral Salinas through village associations which are very active and very aware of the major issues of sustainable development. To preserve this natural heritage, groups such as the Assirem Gouraya Association organize activities aimed at contributing to environmental sustainability in order to guarantee the protection of the natural and cultural resources of the region.

See the video about the Salinas made by the Assirem Gouraya Association.

For World Wetlands Day, the Association Assirem Gouraya has carried out a review of their activities in 2017.

To learn more about the Salinas, you can read the reports made by the Assirem Gouraya Association

Read the prospecting report of January 5, 2017 (in French language)

Read the prospecting report of January 19, 2017 (in French language)

Read the investigation on the Salina of Iadnanen in the region of Imellahen in the Commune of Feraoun, Bejaia of January 19, 2017 (in French language)