Last Tuesday, 14th February 2017, was a historic day for nature conservation and sustainable development in the Prespa region in the borders of Albania, Greece and The FYR of Macedonia with the long-awaited ratification by the Greek parliament of the tripartite ’’Agreement for the Protection and Sustainable Development of the Prespa Park Area” by an overwhelming majority.

Besides its importance for the Prespa region, the implementation of the 2010 agreement will be a milestone for Southeastern Europe too. In 2000 the declaration on the establishment of the transboundary Prespa Park relayed a message of peace and cooperation among the peoples of the region, following the years of great upheavals and wars of the 1990s. In today’s world of insecurity, introversion and new nationalisms, the implementation of the international agreement for the Prespa Park takes on an optimistic symbolism once again, as it will cultivate friendship and peaceful coexistence for the sustainable prosperity of local societies on the basis of nature conservation.

It reconfirms that environmental protection is not a restriction but rather an opportunity and a means for sustainable development; it also reiterates that the way forward is not isolationism and hostility, but bridging differences and building synergies for the benefit of all.

The governments of the three countries sharing the lakes, together with the EU, have emphatically acknowledged the importance of nature and water protection in the sustainable development and prosperity of the area. The strong links between human beings and nature in Prespa have once again been highlighted and the three peoples have agreed to work together towards a future that recognizes the needs of all. 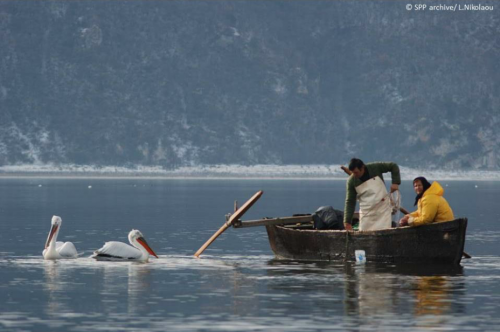 The voices and efforts of so many people and environmental organizations at international, national, regional and local level, such as EuroNatur, KORA, Macedonian Ecological Society (MES), Protection and Preservation of Natural Environment in Albania (PPNEA), the Society for the Protection of Prespa (SPP) which won one of the first Ramsar Wetlands Awards in 1999, the Ramsar Convention on Wetlands, and MedWet have come together for a common endeavour that can become a milestone for similar initiatives in other parts of the region.

On 16-17 October 2000, at the invitation of the then Secretary General of the Convention on Wetlands, Delmar Blasco, the official delegations of the governments of Albania, Greece and The FYR of Macedonia met in Tirana to take forward the establishment of the ‘Prespa Park’, as agreed by the Prime Ministers of the three states on 2 February 2000. The International Working Meeting was organized by Thymio Papayannis, in charge of MedWet at that time, and hosted by the National Environmental Agency of Albania. (See docs of conclusions of the meeting here).

On 2010, World Wetlands Day 2010 a major step forward in preservation and rational use of the Prespa region was achieved with the signing of an international agreement between Albania’s Environment Ministers, Greece, The FYROM and the EU. This agreement legally bound the three countries to develop a common strategy and implement measures aimed at protecting the environment as well as developing human activities in the region. This agreement complements the first joint declaration signed in 2000 which established the Prespa cross-border park, the first protected cross-border area to be established in the Balkans (see the draft of Prespa Park final agreement) 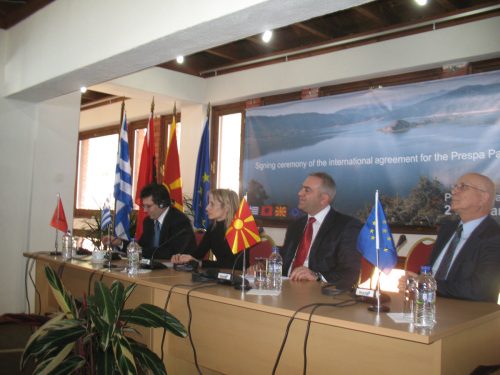