“If it is not properly managed, climate change could threaten not only the environment but also the economic prosperity … and, more broadly, peace, stability and international security,” says the Intergovernmental Panel on Climate Change (IPCC) in its last report in April 2014.

Water is a vital natural resource and the basic element of life. It is an essential commodity for life and the majority of human economic activities. But, nowadays, it is at the centre of concerns for the future of our planet.

Only 3% of the world’s water is fresh, and most of that is frozen. Yet every human needs 20-50 liters of water a day for basic drinking, cooking and cleaning. Wetlands provide that water, and they also help replenish groundwater aquifers. That means that conserving water starts by conserving wetlands as they serve as natural water conservation tools.

But, unfortunately, the Arab world is undergoing a palpable decline in environmental resources, and water is among the key resources that are threatened. In most countries in the Middle East and North Africa region (MENA), scarce fresh water is diverted, misused, and polluted with hazardous wastes, sewage, agricultural waste, and other chemicals. 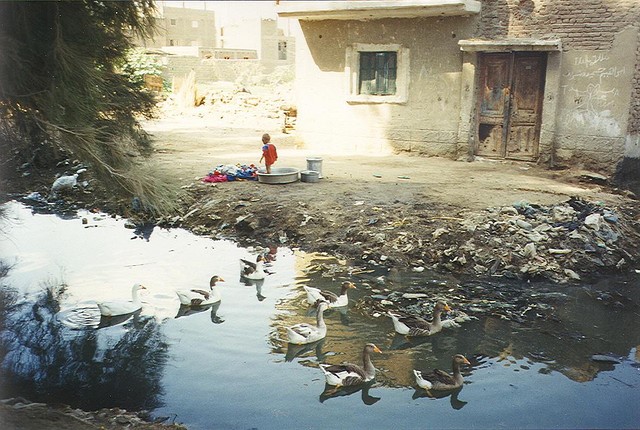 According to the World Bank, the MENA region will be hit harder with higher temperatures and more severe droughts because of climate change.

‘’As a result of global warming, especially changes in precipitation patterns, water availability will decrease in most parts of the MENA region throughout the 21st century, with decreases possibly exceeding 15% in a plus 2°C world and 45% in a plus 4°C world’’, says the World Bank

There will therefore be huge pressures on scarce water resources. An increase in demand as a result of population growth and a rise in affluence, combined with a decline in supply due to climate change (especially changes in rainfall and seawater intrusion into groundwater reserves) and groundwater overuse (51% by 2050), will place most Arab countries under the absolute water-poverty level, defined as 500 m³ per person.

In Morocco, studies conducted by researchers at the Hassania School of Public Works (EHTP) show the impact of climate change on basins of the Haouz, Moulouya and Ziz Hriss. Respecting MAGICC and SCENGEN universal methodologies, they announce an average temperature increase of 2.2° and a reduction of precipitation of up to 16%. At the Hassan Addakhil watershed dam, EHTP researchers anticipate, on the horizon of 2050, a decrease of 9.7% in the volume of water collected.

In Tunisia, after a very difficult summer 2016, with the country experiencing a drop of 30% in rainfall, water is already very scarce, and this can be seen in water distribution cuts, thirsty vegetation and empty dams. This lack of water affects various domains, such as agriculture which represents 82% of water demand, and does not meet the need for drinking water for domestic, industrial or tourist uses, which amount to 17%.

Severe droughts in Eastern Syria have destroyed the livelihoods of 800,000 people and killed 85% of livestock. 160 entire villages have been abandoned before 2011.

The infrastructure, environmental deterioration, and water deficits in the Gaza Strip will make it uninhabitable by 2020. In Egypt, coastal settlements and economic productivity are extremely susceptible to sea-level rise, with vast stretches of the Nile Delta set to be lost.

A fisherman in Alexandria. © Yara Ahmed / Your Middle East

Changes in the hydrological cycle will lead to a decline in freshwater supply and agricultural production; the anticipated rise in sea level will inundate and erode vast stretches of coastal settlements; and extended periods of drought will continue causing losses to agricultural and pastoral land and rural livelihoods. These effects, assigned with different levels of confidence by the IPCC and seen as illustrative rather than predictive, are set to have major implications for water and food security, and for health and the spread of diseases.

Global biodiversity is also being lost much faster than by natural extinction due to changes in land use, unsustainable uses of natural resources, invasive alien species, climate change and pollution among other impacts. Climate variability and change affects birdlife and animals in a number of ways – birds lay eggs earlier in the year than usual, plants bloom earlier and mammals come out of hibernation sooner. Today, about 23% (1,130 species) of mammals and 12% (1,194 species) of birds are considered by IUCN to be threatened.

Thus is it clear that rising temperatures will put intense pressure on crops and already scarce water resources, potentially increasing human migration and the risks of social conflict.

The question then is how best to ensure an adequate water and food supply in the short and long terms, despite declining reserves, climate change threats, receding arable land, growing population needs, and mounting pollution.

We must raise awareness about the impacts of climate change and promote a long-term call for action in the Arab world. The MENA region governments are under pressure to develop innovative green solutions, reduce their CO2 emissions, and sustainably protect their livelihoods and scarce natural resources, especially water, from the effects of climate change.