The General Directorate of Forests (DGF) of Algeria, in partnership with the Mediterranean Wetlands Observatory (MWO), organised a 5-day workshop (17 to 21 April 2016 in Jijel, Algeria) to produce thematic maps on land use and flooding dynamics for 50 Algerian Ramsar Sites, using tools from GlobWetland-II (GW-II). These maps have been developed from images from the Landsat 8 satellite covering the year 2015, and the typology used for the land use classification is a hybrid typology that combines the Corine Land Cover classes with the Ramsar Classification System of Wetland Type. 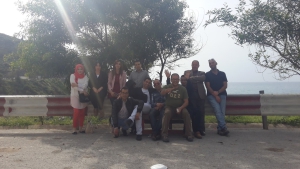 This work comes as a result of the willingness to strengthen the collaboration between the MWO and the DGF in the field of the conservation and monitoring of wetlands in Algeria, particularly in relation with the Ramsar listed sites. The objective is, among other things, to provide updated information on wetland habitats, which will update the site descriptions in the Ramsar Information Sheets (RIS). In addition, the maps and databases produced during this work, and those that were created in the framework of the GW-II project (2010-2015), will serve as references for the development of a new Atlas of Algerian Ramsar Sites, which will also include a retrospective analysis of the evolution of indicators on land use (developed by MWO) between 1975 and 2015. (See publications below from this project)

– Completion of mapping of Ramsar Sites under the GW-II project and updating of the maps for all 50 sites for the year 2015;

– Treatment of this database and a new edition of Atlas of Algerian Ramsar Sites with a retrospective analysis of spatial indicators on the dynamics of land use.

More information about the Information Service on Ramsar sites.
GlobWetland-II project on the site dedicated to the project: http://www.globwetland.org/

Publications of the Observatory of Mediterranean wetlands from the Globwetland-II project:
Mediterranean coastal wetlands: the land use synthesis