Why has this network been created?

What all these birds have in common is that they nest in coastal colonies, which can contain several different species. Since they build their nests on the ground, these species are very vulnerable to disturbance by predators, and require habitats with particular features: sandy, well-drained soil, with very little vegetation, where they are protected from predators and other disturbance. There used to be a large number of these sites along the Mediterranean coast, with winter storms and shifting coastlines favouring the creation of sandy islets in lagoons and on the shore. With the fixing of the shoreline however, the islets are disappearing, either through erosion or because they are being covered in vegetation. Sites suitable for this group of species have thus become rare: today, these species are endangered worldwide, their reproductive success rate (the number of chicks fledged per pair) now being too low to allow for the populations to be renewed. Finally, the yellow-legged gull (Larus cachinnans) often poses problems by taking over adapted areas before the colonial Charadriiformes species arrive, effectively blocking the sites.

Life+ ENVOLL therefore aims to start by recreating a network of suitable nesting sites along the French Mediterranean coast, in the following regions: Languedoc-Roussillon, PACA and Corsica. Two solutions were tested during Charadriiformes programmes, which began in 2007 and have proven to be effective:

On sites where water levels are controlled, the manager can install nesting islets, ensuring that they are able to raise or lower the level of the water column (the rehabilitation of hydraulic infrastructures is often required). The manager can thus make the sites unsuitable for the early nesting of the yellow-legged gull (Larus cachinnans), and then restore suitable water levels when the target species arrive at the sites. 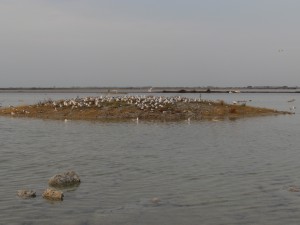 On sites with no hydraulic infrastructures, nest rafts are the best solution: floating structures measuring 25-200 m2 are thus set up on lakes, and have proved to be particularly effective with small species (terns) on small rafts. Large rafts are relatively new in Europe, but have helped large Charadriiformes to breed in America. 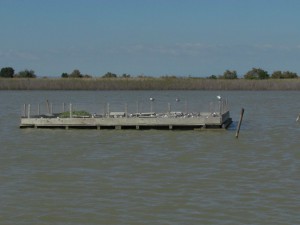 Because these are pioneer species, which do not reuse their nesting sites, new sites have been are developed along the entire Mediterranean coastline. To be effective, the suitable sites should form part of a network, and be run by enthusiastic managers trained in all the necessary techniques! 6 structures have been installed as part of the Life+ ENVOLL project: in addition to the Amis des Marais du Vigueirat [Friends of the Vigueirat Marshes], the Salins du Midi, the Conservatoire d’Espaces Naturels du Languedoc-Roussillon [Conservatory of Natural Areas in Languedoc-Roussillon, CEN L-R], Thau Agglo, the PNR de la Narbonnaise en Méditerranée [Regional Natural Park of Narbonne in the Mediterranean] and the Département de la Haute-Corse [Haute-Corse Department] have all developed the sites that they run in this way.

As well as carrying out specific actions, the Life+ ENVOLL project organises activities to raise public awareness (Réseau Ecole et Nature [School and Nature Network]), to improve the knowledge base (Tour du Valat) and facilitate communication. Finally, there is one part of the Life+ ENVOLL project that is essential to ensure the sustainability of all the actions taken in favour of colonial Charadriiformes: the know-how transfer. In partnership with Pôle Relais Lagunes Méditerranéennes [Mediterranean Lagoons Transfer Unit] and the ATEN skills and resource centre for nature, this part of the project guarantees the creation of tools for capitalising on and training managers and stakeholders in ornithological monitoring, adapted to suit their needs and available over the long term.

Naturally, various monitoring and assessment tools are used to carry out these actions.

The entire project is coordinated by a single association: the Amis des Marais du Vigueirat.

Progress made 1.5 years after the launch of the project

At the time of writing, specific actions have begun on all the sites: preliminary studies, the selection of service providers and in-depth diagnoses are underway, and have even been completed on some sites. Development work has started on the Amis des Marais du Vigueirat’s sites (Salins de Fos [Fos Salt Marshes], RN des Marais du Vigueirat [Vigueirat Marshes Nature Reserve], protection of colonies), the Salins du Midi (work on the Salins de Berre [Berre Salt Marshes]), the PNR de la Narbonnaise en Méditerranée [Regional Natural Park of Narbonne in the Mediterranean] (protection of colonies), and Thau Agglo (on the Salin de Frontignan [Frontignan Salt Marsh]
and the Lagune de Gâchon [Gâchon Lagoon]). In 2015, work will begin in the CEN L-R and Haute-Corse Department sites. 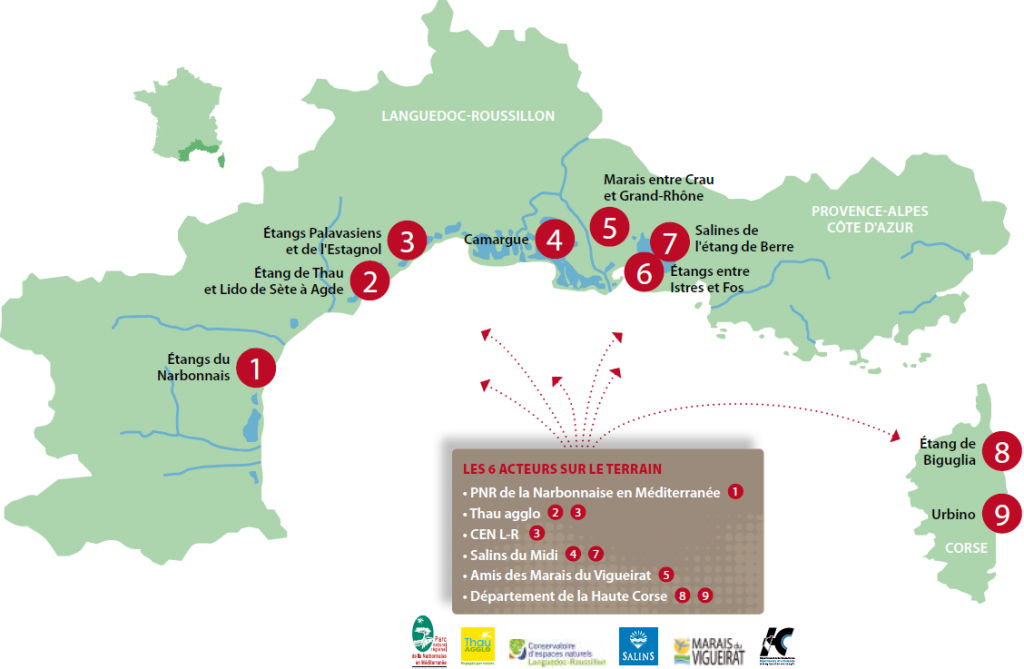 The environmental education team are currently putting the finishing touches to their educational tools: thanks to the activities carried out by the Réseau Ecole et Nature [School and Nature Network], managers are working with specialists in raising public awareness and jointly creating tools for raising public awareness about the needs of colonial Charadriiformes. The first awareness-raising campaign is due to be launched in June 2015!

Good progress was made in 2014 on improving the knowledge base, with two Master’s degree students being supported by the Tour du Valat, in close collaboration with the CNRS – CEFE in Montpellier. The subjects to be covered by the 2015 Master’s degree have been defined, and two students have been selected to carry out this work.

Most of the communication tools have been developed: a website, a Facebook page, a leaflet, two newsletters, etc. In 2015, the first Life+ ENVOLL film will be broadcast and the leaflet will be translated into 5 languages… The tools will be disseminated not just along the Mediterranean coastline, but also farther afield thanks to the various networks Life+ ENVOLL forms part of: Pôle Relais Zones Humides [Wetland Transfer Units], Réseaux de Gestionnaires [Managers’ Networks], ATEN, Ramsar, LIFE project network…

Finally, it should be noted that the Life+ ENVOLL project has already surpassed its planned commitments: with the incorporation of a new partner (l’Office de l’Environnement de la Corse [Corsica Environment Office]) and at least one new site (Les Grandes Cabanes du Vaccarès), the project is really taking off!

Read the newsletter (in french) here