Through a two year study involving scientists from across the region, the status of freshwater biodiversity in the Eastern Mediterranean has been shown to be in an alarming state. With almost one in five species threatened with extinction, and number of species already extinct urgent action is required to restore and protect wetlands and flow regimes, and adopt integrated water resource management practices that incorporate biodiversity needs.

In many regions of the world that are facing significant levels of water stress, there is often a perceived dichotomy between the provision of water for people (or irrigation etc.) and the ‘environment’ (biodiversity). When faced with this choice the needs of biodiversity are, at best, usually only considered if there is any water ‘remaining’ once all other uses have been catered for. The notion that healthy freshwater ecosystems (functioning as ‘natural infrastructure’) that support biodiversity will provide, store, and purify water, and also provide many other valuable ecosystem services (e.g. food, flood protection, recreation etc.) is not widely appreciated. In addition the information required to inform this decision making process about the needs of biodiversity is usually lacking.

Nowhere is this situation more apparent than in the Eastern Mediterranean (Turkey, the Levant, and Euphrates and Tigris catchment), where the decision-making processes governing water resources are largely focused upon requirements for irrigation and energy production. This approach, compounded by impacts of climate change and pollution, has led to extensive loss of wetlands (e.g. Lake Amik in Turkey, and Azraq Oasis in Jordan), an alarming reduction in ground water levels, and a reduction and alteration in water flows across the region (e.g. the Qweik River in Turkey and Syria. 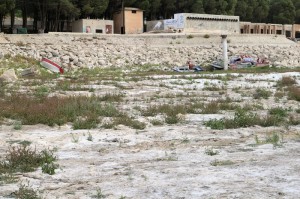 Once famous for its large amounts of cold and clear water, Barada spring in the Syrian Damascus basin was drained in 2008 © Jörg Freyhof 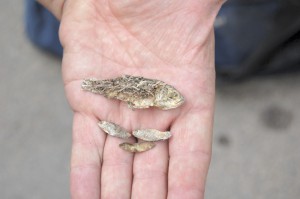 The only endemic species of the spring, the Barada Spring Minnow (Pseudophoxinus syriacus) is Critically Endangered and may be extinct © Jörg Freyhof

As a response to this situation the International Union for Conservation of Nature (IUCN) and partners have recently conducted a project that aims to address the lack of information on freshwater biodiversity, raise the profile of freshwater biodiversity conservation in the region, promote integrated water resource management practices, and better inform decision makers. Through this project, primarily funded by the Critical Ecosystem Partnership Fund (CEPF) and the MAVA Foundation, we identified the conservation status and mapped the distributions of all described species freshwater biodiversity in selected taxonomic groups in the Eastern Mediterranean. The project engaged scientists from across the region over a two year period to assess the extinction risk (according the IUCN Red List Categories and Criteria) of every described species of freshwater fish, mollusc, dragonfly and damselfly, and a significant number of the regions freshwater plants. The findings, recently published in a report, are alarming.

Despite the semi-arid nature of the region there is an amazing diversity of freshwater species. In total 1,236 currently described species were assessed and mapped, of which just under 1/3 are found nowhere else on the planet (they are endemic to the region). However, almost one in five (19%) of these species, and over half (58%) of those endemic to the region, are threatened with extinction. Sadly six species, all fishes, are known to have become extinct, and an additional 18 species (seven fishes and 11 molluscs) are possibly extinct. Molluscs and fishes are particularly impacted, with 45% and 41% threatened, respectively. Freshwater springs are identified as critical habitats, especially for threatened species as they often provide refuges during times of drought and where there is excessive water extraction. 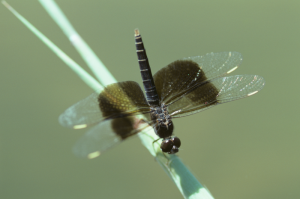 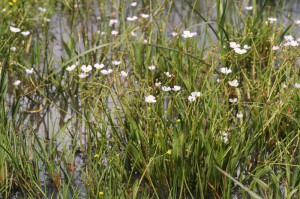 Baldellia ranunculoides (Near Threatened) is threatened by drainage and destruction of wetlands throughout its range. © R.V. Lansdown

There are many freshwater fish species with tiny global ranges in the Eastern Mediterranean region. The Critically Endangered Aci Göl Toothcarp (Aphanius transgrediens) from a spring field in Central Anatolian Lake Acı is just one example. © Jörg Freyhof

A number of sites have been identified across the region that are of particular importance for the persistence of freshwater biodiversity. These sites, known as freshwater Key Biodiversity Areas (KBAs) are presented in a related report, also just published, on Freshwater Key Biodiversity Areas in the Mediterranean Basin Hotspot. These KBAs represent critical sites for freshwater biodiversity that may be used to inform future decisions on the designation of Ramsar sites (Internationally Important Wetlands) and inform environmental planning and private sector development – in particular to aid adherence to environmental safeguards policies and guidelines.

One example is the Haditha Karst (Cave) system KBA in Iraq, which is impacted by falling groundwater levels, supporting two endemic and Critically Endangered cave fishes; the Haditha cave fish (Caecocypris basimi), and the Haditha cave garra (Typhlogarra widdowsoni). Another is the Lakes Aci and Salda KBA, in Turkey, which support a number of threatened fish and molluscs including the endemic and Critically Endangered Aci Göl Toothcarp (Aphanius transgrediensI). The Lower Asi River KBA in Turkey supports high levels of threatened species (one of the highest in the region) and contains many critical wetland habitats such as Lake Gölbaşı, a small wetland close to the former (drained) Lake Amik and supports many important mollusc and fish populations. 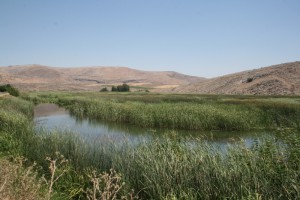 Gölbaşı Lake (in Hatay, Turkey) is close to the former Lake Amik on the Karasu River. © Manuel Lopes-Lima 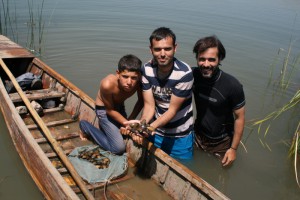 Field surveys are urgently required as much of the data on the region’s freshwater species are outdated. Manuel Lopes-Lima with local fishermen surveying bivalves in Gölbaşı Lake (in Hatay, Turkey). © Manuel Lopes-Lima

One of the key recommendations is the need to adopt an Integrated River Basin Management approach (or similar strategy) to ensure that freshwater biodiversity is conserved enabling wetland ecosystems to continue to provide ecosystem goods and services. This is especially important for transboundary waters where member states should fully implement the principles of the UN Watercourse Convention (UNWC) and accept responsibility for protection of connected ecosystems beyond national boundaries. Finally, there is an urgent need to set up and maintain long-term monitoring of freshwater biodiversity across the region if we are to prevent further species extinctions and secure functioning freshwater ecosystems for the future benefit of the regions people.

The project was funded by the Critical Ecosystem Partnership Fund (CEPF), the MAVA Foundation and the Spanish Agency for International Development Cooperation (AECID), with contributions from the European Commission funded Biofresh Project, and the National Parks Autonomous Agency (OAPN) of the Spanish Ministry of Agriculture, Food and the Environment.