In April 2013 the government of Montenegro designated its second Ramsar wetland Tivat Saline (Tivatska solila), the first being the Montenegrin portion of Lake Skadar. It extends over 150 hectares and it is already a Special Flora and Fauna Reserve located in the coastal strip of Tivat Bay between the rivers Odoljenštica and Koložunja. The site comprises a centuries-old former salt works and includes the underwater site of Jankove Vode. Archaeological relics have been indentified around the area dating back to the 6th century BC. It is an important resting and feeding area for migratory birds and the regional population of Pygmy Cormorant (Phalacrocorax pygmeus). The site also supports such endangered reptile species as Ophisaurus apodus, sea turtles like Caretta caretta, and the endangered amphibian Rana shqiperica and supports complex types of halophyte vegetation. More information on the site is available. 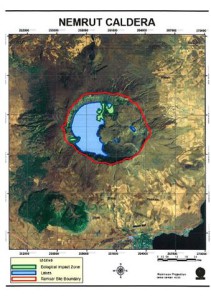 In May 2013 the government of Turkey designated its fourteenth Wetland of International Importance the Nemrut calder (Nemrut Calderasi). The caldera of the Nemrut volcano located on the western shore of Lake Van in the eastern part of Turkey (Eastern Anatolia) and one of the most important wetlands of Bitlis province. the eastern half of the caldera is filled by pyroclastic deposits related to maar-like explosion craters, lava domes and flows. The western half is filled by a freshwater lake and a small lake with hot springs, in addition to a number of small temporal lakes. The largest lake, Lake Nemrut, has a half-moon shape, an average depth of 100 meters, and colorless, odorless and drinkable water. More information on the site is available.

The MedWet secretariat would like to congratulate the governments of both Turkey and Montenegro and deeply hopes that these new designations will assist the wise use and conservation of these wetlands.