The 2 February, people and organizations all over the world celebrate, the World Wetlands Day. In the Mediterranean, from its northern to its southern shores, a variety of activities took place for the celebration of the WWD 2013, ranging from field trips to wetlands to environmental education activities to specialist conferences. The Ramsar Convention’s message this year- Wetlands take care of water– proved to be a powerful theme, of special importance to the Mediterranean region and well linked to the World Water Day which took place on the 22 of March. We would like to remind you that MedWet has created a Mediterranean adaptation of the Ramsar poster for WWD2013 available for printing.

In order to better inform MedWet members and partners, we tried to collect information on the activities organized by Mediterranean countries to celebrate this very special day. We are grateful to those who sent us their reports and we hope we will receive more in the near future. We have posted all the information and reports we have received on our dedicated World Wetlands Day section on our website and as new information is received it will be posted in the same location. 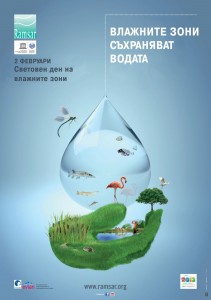 In Bulgaria the WWD2013 poster was translated into Bulgarian by the NGO Green Balkans and was widely disseminated. Activities were organized for schools with the participation of various organizations and the Ministry of Environment and quite notably a competition was held by the Museum of Natural Science in Burgas together with the Bulgarian Biodiversity Foundation, for the design of informational material for the Atanasovsko Lake- a Bulgarian Ramsar site. In Serbia, the WWD was celebrated at the Provincial Institute for Nature Protection in Novi Sad, jointly organised by three Ministries and other state organisations. The event was very successful and was attended by representatives of many ministries, experts, managers of protected resources and non-governmental environmental organizations involved in wetland conservation.

Albania and the FYR of Macedonia celebrated the WWD by organising a round table in Ohrid for the Joint Watershed Management Committee Secretariat for Ohrid and Prespa lakes. In Montenegro, the WWD activated the process for the designation of a new Ramsar wetland in the country, the Tivat Saline. In Bosnia and Herzegovina, a conference was organised in light of the WWD2013 to raise awareness on the Hutovo Blato wetland which is a Ramsar site. With a wide attendance, the debate was centered on the sustainable funding of the “Hutovo Blato Park” and the transfer of water for hydropower needs. In Slovenia apart from the activities organised by wetland associations, TV coverage of the WWD2013 allowed the message to be widely heard. It should be noted that walks were organised along the Mura River with the participation of the Ramsar Secretariat to bring attention to the need for and importance of the future UNESCO “Mura-Drava-Danube” Biosphere Reserve, an ambitious transboundary site for the protection of what is called the “European Amazon” between Austria, Slovenia and Croatia.

In France, a large number of activities from guided visits to exhibitions to tasting sessions of wetlands products took place, which attracted a large number of participants despite the cold temperatures. In the PACA region, Languedoc-Roussillon and Corsica, a total of 3350 participants including 633 schools and 1754 members of the general public were involved. To mention two of the diverse activities that took place, there was an open day in the eco-museum of the Biguglia wetland in Corsica- a location that we visited during the 10th meeting of the Mediterranean Wetlands Committee- and an art and photographic exhibition in an abandoned building next to the Villeneuve salinas. In Spain various activities were organised by wetland associations and management bodies as well as Autonomous municipalities mainly centred on wetlands education for school students and guided visits. Similarly in Greece, the activities organised involved guided wetland walks and organised birdwatching sessions for the public, as well as activities for young people and presentations about the importance of wetland conservation in locations like the Katogi-Strofylia wetland complex, the Nestos Delta and Prespa.

In Portugal the poster and leaflet were translated by the NGO Almargem and activities for children were organised. In Cyprus radio and TV talk shows were held, where representatives from the Ministry talked about the importance of wetlands and the state of Cypriot sites.

In Turkey the WWD2013 was celebrated in all provinces by both the Ministry of Forestry and Water Affairs, General Directorate of Nature Conservation and National Parks (MoFWA GDoNCNP) as well as other relevant organizations. National Wetland Awards were given in three categories “Science and Research”, “Management” and “Education and Awareness”, material for children and the public were produced on the wetlands and birds of Turkey and a ceremony with 350 participants was organized in Istanbul.

In Jordan, a festival was held in Al Azraq wetlands reserve, where over 150 local community members stakeholders and school students attended. The participants were engaged in touristic activities that gave them an idea about wetlands tourism including hiking, bird watching, eco games, and a short interactive workshop about Wetlands. In Palestine it is to be noted that the Coastal wetlands of Wadi Gaza has been put in the tentative list for a World Heritage Site designation. 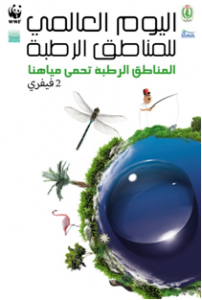 In Tunisia, the WWD2013 was celebrated through a meeting attended by relevant state organizations, associations and other organizations involved in conservation, university students and the media. During the meeting the three new Ramsar sites inscribed in the list in 2013 were presented, one of which is the Lake of Tunis where Med-INA with the help of MedWet are intervening in a restoration project based on the cultural aspects of the site. The activities of the new association for Tunisian wetlands, TunWet, were also presented. In Algeria and Morocco activities for students and the public were organized in many wetland sites and local and national press coverage for the WWD was held.

Through the World Wetlands Day events, wetland communities around the Mediterranean worked hard to demonstrate their commitments to protect on a daily basis, these important ecosystems. We hope the efforts of the Mediterranean stakeholders to transmit their messages about  the importance of wetlands, the value of their wise use and conservation and their role in water availability and quality, will remain strong and relevant all through the year.