The  Third Meeting of the Ramsar Regional Initiative on the Black and Azov Seas Coastal Wetlands –  BlackSeaWet was hosted by the Ministry of Forestry and Water Affairs, General Directorate of Nature Conservation and National Parks in Istanbul, from 6th to 8th November 2012,This sister initiative of MedWet has the similar objectives to stop the loss and degradation of the coastal wetlands of the region. 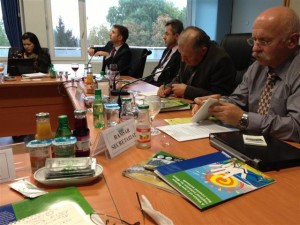 The meeting was attended by the representatives of all country partners (Bulgaria, Georgia, Republic of Moldova, Romania, Ukraine and Turkey) with the exception of the Russian Federation. Observers to the meeting were Tobias Salathe, Nejib Benessaiah, Bart Fokkens and Vasiliy Kostiushin, respectively representatives of the Ramsar Secretariat, the MedWet Initiative and Wetlands International.

The Meeting  was opened by Grigore Baboianu, the chairman of the Management Body of the BlackSeaWet Initiative, and Mustafa Akincioglu, Deputy General Director, Nature Conservation and National Parks in the Ministry of Forestry and Water Affairs, who expressed the wilingness of Turkey to support the cooperation between all the member countries and the international stakeholders in order to enhance the preservation of the coastal wetlands of the region.

The Meeting Agenda included the country reporting, and the proposed Action Plan for 2013. All the country representatives presented their activities at the national levels and exchanged through their discussions, information and lessons learned. CEPA activities were also presented related to communication, education and public awareness in order to disseminate information on the Initiative and bring attention to the importance of wetlands and coastal ecosystems.

Concerning the Action Plan for 2013, a long list of activities were underlined by the Chair, but the participants considered necessary to revise this ambitious list and target the potential activities that can reasonability be achieved taking into account the actual resources of the initiative.

The MedWet Coordinator and the Ramsar representative suggested to the participants to split into three main groups to debate and bring recomendations for the following project concepts: climate change adaptation, monitoring of migratory birds and sustainable hunting. All the participants actively took part in the reflexion groups and agreed on the following activities for 2013: