When it comes to water, the South and East Mediterranean region is one of the poorest parts of the world. The annual consumption of water continues to exceed the renewable resources and several major wetlands that contain a significant portion of these resources have been destroyed during the past century, due to lack of recognition of their importance and value. Thus, many communities living around these wetlands have become impoverished and are often not involved in decision-making and planning processes of this resource.

The Wetlands International Programme office in the Mediterranean, hosted by the Tour du Valat, facilitated the implementation of an initiative that funded by the Canadian International Development Agency – CIDA that aimed to strengthen the role of civil society in water resources management in southern and eastern Mediterranean. Three demonstration projects, led by national partners, were implemented in Jordan, Morocco and Tunisia. 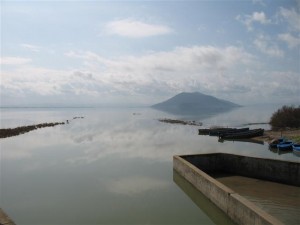 In Tunisia, the project was led by the National Agronomy Institute of Tunis – INAT, where it developed a water-resource-allocation decision-making tool for Ichkeul Lake in Tunisia through engaging a consultative dialogue with all relevant stakeholders, including local communities, research institutes, NGOs and governmental decision-makers. The tool, using research models and scenarios, would improve the decision-making by the Ministry of Agriculture and Water Resources on water-allocation. This model, if adopted, would assure equitable use of water resources for local communities and biological diversity through a participative approach.

In Morocco, the national partnership between the Moroccan office of WWF Mediterranean Programme – WWF MedPO and Sebou River Basin Agency – ABHS as implementing agencies of the national project was a good model to start with in the first place since it combines both an NGO and a governmental agency. The project in Morocco developed and established a monitoring protocol for evaluating the ecological status of freshwater in Sebou River Basin, while involving civil society through the establishment of a Green Platform that is composed of NGOs, local community representatives and research institutes. The monitoring protocol would serve as a major tool for guiding practices along the river basin. Through this protocol, Sebou basin has become the first river basin in Morocco that adapts the EU Water Framework Directive in a non-EU country. Assessment of the potential for replication of this project to other basin agencies in Morocco has also been conducted. 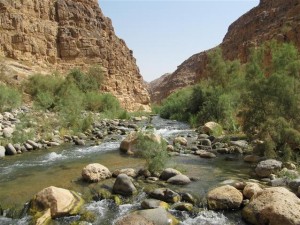 In Jordan, the project was implemented by the Royal Society for the Conservation of Nature – RSCN. An impact assessment of the Mujib dam on biodiversity in the Mujib River Basin was completed, ensuring the management of the dam and the river basin take biodiversity needs and values and the sustainable local use of water resources into account. An integrated management plan and a local water strategy were produced while involving all relevant stakeholders, including representatives of local communities and Jordan’s Central Water Authority. A wide awareness program was also carried out targeting all different stakeholders.

In order to maximise the regional experience among the national partners of the project, several exchange programme among the different partners were coordinate by the regional programme. These provided opportunities for each partner to gain from the experience of the others. Additionally, a series of roundtable meetings were held throughout the project where the different partners were present to share their achievements, challenges and lessons learnt.

The regional programme managed to achieve a high level of visibility on the Mediterranean regional level. In coordination with its national and regional partners, concept of the programme was presented as a solution for the Mediterranean Water Forum that was held in Marrakech in December 2012. The solution proposed by the programme focuses on Changing the way water is managed in the south and east Mediterranean: ‘Wetlands as natural infrastructure’. The solution was later presented and adopted by the 6th World Water Forum that took place in Marseille in March 2012.

Also, the programme along with its national projects was presented in the International symposium on Water and Mediterranean Wetlands which was held in Agadir, Morocco in February 2012 organised by MedWet. The national projects were presented through different thematic sessions and one of these projects won the poster award in the symposium. Wetlands International was also co-facilitating the session “Ecosystem-based approach to water resource management” along with WWF-Med PO and Global Water Partnership and as a result the programme concept has been adopted as one of the future commitments for Agadir for the coming 20 years.

Wetlands International is currently setting the foundations for a partnership programme along with the regional partners of Tour du Valat, WWF-MedPO, Global Water Partnership-Mediterranean, IUCN and MedWet to carry out the concept mentioned earlier.

Read the leaflet of the project here: WI_Engaging_CSO_inWaterManagement