Nejib Benessaiah, MedWet Coordinator, represented the MedWet Initiative in the World Wetlands Day (WWD) celebrations that took place on the French island of Corsica. Back in June 2010 MedWet held its 10th Mediterranean Wetlands Committee meeting in Corsica, close to the picturesque city of Bastia. During this very successful event the environmental class of the College d’Ile Rousse, aged 13 years old at the time,  presented to the MedWet/Com10 participants their experience and results of the Role Playing Game (RPG) they had played in their class. On the 1st February 2011, for the WWD, a press conference was organized in which an improved version of this game was presented, as well as another, simple wetland education game. 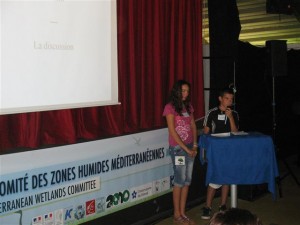 The Role Playing Game (RPG) was designed so that the students could understand the complexity of environmental problems, the many interests that play a part in environmental protection and the necessity to establish a dialogue approach to resolve these conflicts. Under the guidance of MedWet, and with the active help and facilitation of regional actors like the DREAL Corse, Office Environnement Corse, Agence de l’Eau, Conseil Architecture Urbanisme et Environnement (CAUE-2B) and Martine Philibert, environmental teacher in the College d’Ile Rousse, the RPG was much appreciated by the young students. Each student took on the role of a stakeholder who had an interest in the Etang of Biguglia, a Ramsar wetland which they visited during a field trip. The stakeholders/roles were the farmer, fisherman, mayor, environmental expert and others and a debate began between them which led them to certain conclusions. It was these conclusions and their experience that they presented in the MedWet/Com10 through a video they and through their own words. 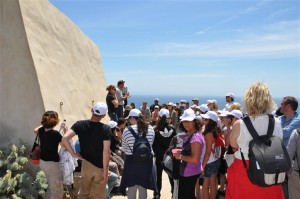 Since the MedWet/Com10, our Corsican partners (DREAL Corse, OEC, CAUE 2B) have produced a better version of the RPG using material like printed role cards and interactive wetland maps. They have also produced a Snakes and Ladders game (Jeu de l’Oie) on student’s knowledge of wetland and watershed values and functions.

The excellent material produced in Corsica was promoted through a press conference in the College d’Ile Rousse. Media coverage of the event was very good, an article was written on this in the local newspaper “Corse Matin”, a radio show on Frequenza Mora was arranged and a very interesting TV show on this subject was filmed by Tele Paese in which Nejib Benessaiah emphasized the role of MedWet in this process.

MedWet was also invited to chair a one day workshop in the University of Corsica in Corte on the topic of this year’s WWD- Forests for water and wetlands. It consisted of five lectures on the values of forested wetland, the state and value of Corsican forested wetlands like the Fango Valley watershed as well as their relationship to freshwater availability. The workshop was attended by more than 150 participants from the general public, university students and environmental organizations.

MedWet is very keen to involve more young people from around the Mediterranean in its activities and to develop material that will educate and raise the awareness of younger generations on environmental problems, processes and values. The RPG, which was piloted by the College d’Ile Rousse, is already being adapted and will be played by many more classes around the Mediterranean.