What is World Wetlands Day? 2 February each year is World Wetlands Day. It marks the date of the adoption of the Convention on Wetlands on 2 February 1971, in the Iranian city of Ramsar on the shores of the Caspian Sea. Each year since 1997, government agencies, non-governmental organizations, and groups of citizens at all levels of the community have taken advantage of the opportunity to undertake actions aimed at raising public awareness of wetland values and benefits in general and the Ramsar Convention in particular. 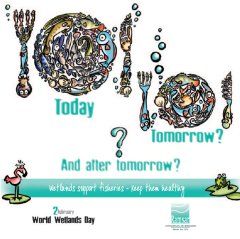 Our focus for February 2nd 2007 is o­n wetlands and fisheries in recognition of:

-the needs of the one billion people who rely on fish as their primary source of animal protein;

-the state of the world’s fisheries where 75% of commercially important marine and most inland water fish stocks are either currently overfished or being fished at their biological limit, and where the effects of unsustainable aquaculture practices o­n wetland ecosystems are of growing concern;

-the adoption in November 2005 by the Ramsar Convention of a resolution and annexed guidelines o­n the conservation, production and sustainable use of fisheries which commits the 153 Contracting Parties to the Convention to playing their role in establishing and maintaining sustainable fisheries in wetlands.

More information on World Wetlands Day and the materials made avialable for this event by the Ramsar Convention Secretariat is available here. Information o­n Worl Wetlands Day is avialable in French and Spanish.